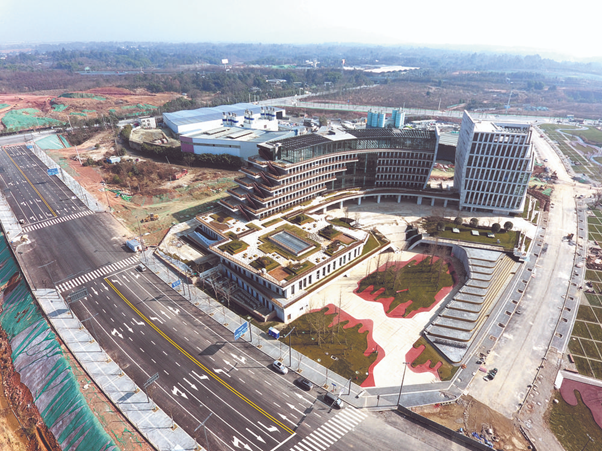 A massive research and development base is taking shape in the Chinese city of Chengdu, the fourth such national-level center devoted to promoting agricultural science and technology.

When completed, the Chengdu National Agricultural Science and Technology Center will cover 203 square kilometers, roughly more than three times the size of Manhattan.

Construction for the first phase of the project, a joint undertaking between the Chinese Academy of Agricultural Sciences and the Chengdu municipal government, is slated for completion by the end of this year, according to Chengdu Daily.

Envisioned as the “Silicon Valley” of agricultural R&D, the center will be home to a fully automated 20-story indoor vertical farm that showcases the use of LED lighting, artificial intelligence, big data analysis, internet of things, intelligent sensors, and other advanced technologies in fully automated farming.

China has invested heavily to promote agricultural innovation to enhance the supply of major products like grains to ensure food security.

In the 13th Five-Year Plan that covered the period 2016 to 2020, China’s government laid out priorities such as promoting water-efficient agriculture, raising the level of mechanization for the plowing, planting, and harvesting of major farm crops, facilitating the adoption of the Internet of Things in agriculture and supporting the development of e-commerce platforms for farmers.

It also committed to making a serious push to reduce pesticide and chemical fertilizer use.