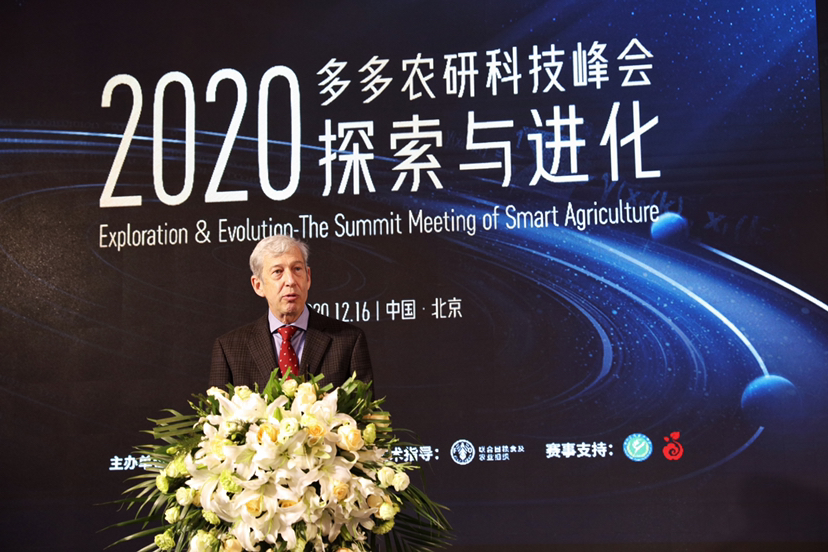 Technology can play a crucial role in increasing agricultural productivity and reducing global poverty and hunger if the solutions are well-designed and adapted to local conditions, according to experts at a conference on smart agriculture.

At the same time, care must be taken to ensure that technology empowers and not exacerbate a divide for vulnerable populations such as women in agriculture. Data privacy and security also need to be safeguarded in implementing digital technology, the experts said.

The forum on smart agriculture, titled “Exploration and Evolution,” was held in Beijing on Dec. 16 in conjunction with the results announcement of the inaugural Smart Agriculture Competition organized by Pinduoduo and China Agricultural University.

The competition pitted technology teams, which employed data analysis, intelligent sensors, and greenhouse automation, against some of the top growers in China to see who can produce the most cost-effective yield. According to the organizers, the technology teams produced an average of 196% more strawberries than the traditional growers in terms of weight and outperformed in terms of return on investment.

“The focus on speeding up the development of applied solutions to further lower costs and digitalize agriculture makes a lot of economic sense for the small farm-holders that characterize China’s agriculture industry, but can also benefit large scale high-end growers,” Wouter Verhey, Agricultural Counselor of the Netherlands Embassy in Beijing, said at the event.

“We need to do more with less to enable more sustainable agribusinesses on the one hand and a sustainable cultivation, preserving our planet and farmers on the other hand,” he said.

Drawing a comparison to his home country, Verhey said that innovation, sustainability, and cooperation lie at the core of the Dutch success in agriculture. Much emphasis is also placed on research, training, and education of the industry professionals.

Holland has roughly half the land area of Jiangsu province but is the second-largest net exporter of agricultural products in the world, Verhey said. The climate control and fertigation technology used in the Smart Agriculture Competition was provided by Ridder Group, a prominent horticultural automation company from the Netherlands.

Read: Farmers flocked to this team of university researchers to ask for help planting strawberries

Given that agriculture accounts for 26% of employment globally, but with 700 million living below the poverty line, “strengthening the income of the smallholder farmers would have a significant impact on poverty reduction,” she said.

Goh also spoke about the importance of financial inclusion for women and other vulnerable populations in agriculture, especially as more people are being pushed into extreme poverty due to the Covid-19 pandemic.

“Expanding women’s access to financial products and services is one of the most powerful contributors to the economic empowerment,” Goh said.

Several speakers presented on the practical application of technology in farming, including Ranveer Chandra, chief scientist of Azure Global at Microsoft, who spoke about how the company’s FarmBeats project aimed to solve some key hurdles to technology adoption in agriculture, such as the lack of power or Internet connectivity and low technical expertise of most farmers.

Agriculture is “heading towards a future where we want to make all of these more automated, not just to grow more food but also it helps farmers be more productive. It helps save resources. It also enables a future that is more sustainable,” Chandra said.

Taking hydroponics, or soil-less cultivation, as an example. While many high-tech systems can cost as much as $40,000, this was impractical for most developing countries, according to Hila Cohen, head of business development at the World Food Programme Innovation Accelerator.

“High tech is not always the right solution,” she said, noting any technological solutions must be adapted to local realities, such as a lack of expertise in maintaining complex systems or the unavailability of spare parts. The WFP was able to deploy a $3,000 version of the hydroponics system by using locally available materials, she said.

A common thread in the forum was the urgent need for action and collaboration between the different stakeholders to effect change.

The FAO will continue to work closely with government agencies, private sectors and research agencies to unleash digital innovation potential, and promote and realize the UN Sustainable Development Goals, he said.