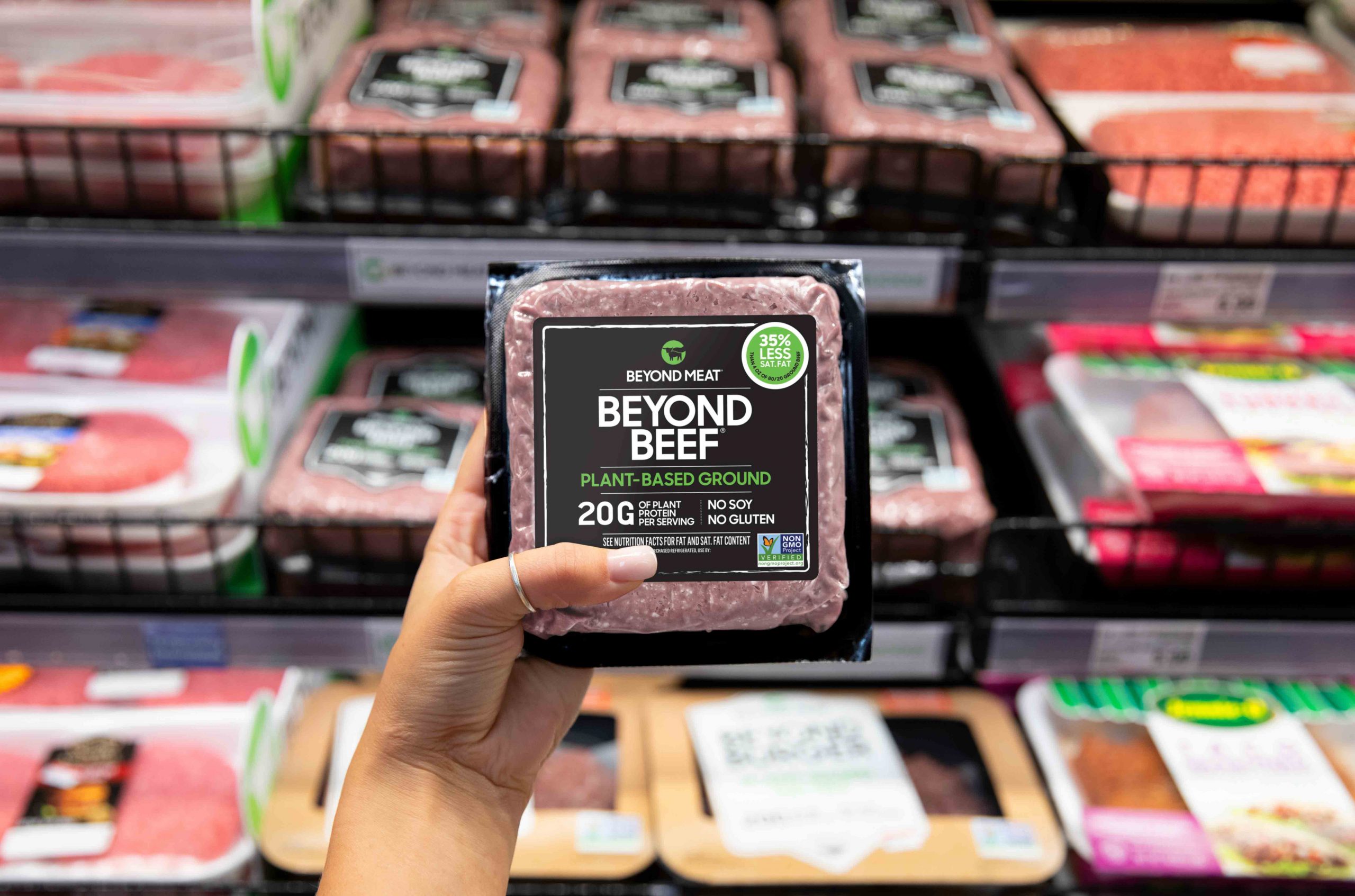 In the young agrifood sector, every exit is dissected and analyzed for its merits as an industry turning point. This is particularly true with Beyond Meat’s initial public offering in 2019.

Brands like Beyond Meat and Impossible Foods helped inspire a new generation of entrepreneurs. The APAC region alone now counts 70 protein alternative startups. Investors have responded. Globally, $1.1 billion went into plant-based protein investments during the first half of 2020, more than double the inflows for the whole of 2019.

Beyond Meat’s market cap has soared sevenfold since its IPO to exceed $10 billion. This pegs the company at more than half of the valuation of meat giant Tyson Foods, and that is before Beyond Meat has turned a profit. When its “PLANeT Partnership” collaboration with PepsiCo came to light, its shares skyrocketed by nearly 40% for its largest single-day gain.

As a statement of its confidence in the Chinese market, Beyond Meat is building its first Chinese factory in Zhejiang. It is also testing its pork recipes for the Chinese palate in parallel. The factory news came on the heels of Nestle’s decision to build plant-based meat manufacturing capacity in Tianjin. Cargill has also been making plant-based products in its Anhui facilities, selling them through food services such as KFC and retail channels such as Lawson.

Looking past the headlines, are these players’ optimism for the Chinese market justified? Can any interest in these protein products from local consumers be sustained or is it a bubble waiting to burst? What opportunities does China offer to protein startups and investors?

What follows is our perspective as a China-focused food tech VC on the investing opportunity in protein – both animal and animal-free. We also discuss the macro forces and unmet market needs that food tech disruptors are fighting to fill.

Meat consumption in China soared by 200% between 1990 and 2013. In 2019 the total meat consumption declined for the first time in recent history due to rising prices. But the growth trend is expected to return when supply goes back to normal. China now consumes 28% of the global meat supply, higher than the European Union and the United States combined.

Gradual improvement in farming production has increased access to meat in past decades. Yet compared to industrialized nations, China’s use of inputs is much less efficient in delivering yield. Its pigs per sow are far lower than the international average. Smallholder farms have long dominated the industry, and their weaknesses came under the spotlight in the handling of the African Swine Flu. With hundreds of thousands of small farms spread across China, it was challenging to provide and enforce even basic biosecurity guidelines.

Biosciences are set to disrupt the protein supply chain

While agtech startups are improving traditional animal production, a growing class of startups are adapting advances from the biomedical field to challenge how meat is grown.

When Dutch scientist Mark Post produced the first cell-based burger in 2013, it opened the world’s eyes to the possibilities of eating animal meat without the need to raise whole animals.

Read: TurtleTree Labs sees cell-based milk as part of solution to feed the next billion people

Cell-based meat is produced using just a small sample of animal cells grown in a nutrient-dense liquid medium. Since it comes from animal cells, cell-based is likely the best option for producing a “biologically equivalent” alternative to animals to provide the full nutritional value and all the aroma, texture or flavor of meat. And because the protein is produced in a sanitized bioreactor environment, it can provide a viable defense against growing epidemics fueled by intensive animal farming. Cost has been a leading hurdle.

Israeli startup Future Meat Technologies applies a distributed manufacturing platform to produce non-GMO meat products. Since its founding, the company has significantly brought down its costs. It does so by advancing a closed-loop system that allows for media recycling, and by using a distributed manufacturing model with smaller cost-efficient bioreactors. In February 2021, the company announced it reduced the production cost of a single serving of cell-based chicken breast to $7.50. This was a drastic decline from the $325,000 price tag for the original patty in 2013.

China has seen several home-grown cell-based meat startups as well. One of these companies, Joes Future Food, raised 20 million yuan from Matrix in 2020.

Agtech and cell-based meat production are addressing supply chain challenges. What about the consumers? What types of novel protein products will not only tickle their fancy but create sustained demand? Where will plant-based products go from here?

The Chinese diet has long encompassed a wide range of plant-based food and beverage products, from soy-bean milk to tofu to Buddhist vegetarian mock meat. The options are rapidly expanding. Plant-based food has energized the innovative food category in startup funding with several companies raising two to three rounds each within a year. The largest dairy and soda companies have all added at least one plant-based product line. But are the new offerings meeting consumers’ expectation for taste and health?

Read: Cultured meat may land on your plate sooner than you think, says CellX CEO

With the help of texturized protein suppliers, flavor houses and contract manufacturers, new plant dairy and meat products can be launched with relative ease in China today. This means most companies have invested little to develop novel ingredients or made an effort to improve upon protein functionality, formation or application technology. The result? New products are coming to the market rapidly with fairly uniform performance. Few stand out with glowing consumer reviews on taste.

Many plant foods and beverages are not necessarily healthier either. Taking a popular walnut protein beverage in China as an example, one 240ml serving contains 8.5g of sugar — close to a third of the recommended daily sugar intake per day — and only 1.4 grams of protein, which is only a sixth of the protein found in the centuries-old soybean milk.

To create sustained demand, there is an opening for enabling technology to elevate the entire category. This includes new ingredient sourcing and processing that can boost the nutritional value and the sensory experience of the final product. Some examples are ingredient tech companies that are innovating in aroma, binding, oil-holding, emulsification, salt and fat reduction, as well as neutral-tasting texturized protein sources that can become price competitive. We are also looking at companies advancing processing and formation technology to improve the texture and mouthfeel.

When the Covid lockdown eased and restaurants started to reopen, China saw one plant protein product launch after another. Yum China cooperated with Beyond Meat to serve Beyond Burger at KFC, Pizza Hut, and Taco Bell in summer 2020.  Local tea shop chain HeyTea paired with Chinese startup Starfield to offer the meat-free Cheezo Burger. Adding plant-based products proved to be an effective marketing strategy to win customers’ attention when most remain reserved about eating out.

The plant protein sector is moving ahead and charting its own course. Now that consumers can taste this new wave of plant-based products on Chinese soil, their feedback will ultimately write the story of how the sector will develop in China.

Globally, climate change and animal rights issues have fueled the animal-free movement. The same has not yet entered the mainstream Chinese mindset. Until the industry offers plant substitutes that hit all the marks including flavor, aroma, texture, aesthetics, it will hit a wall trying to win over mass consumers. Ingredient tech and processing innovation are the very elements needed to continue raising the bar of protein foods and beverages. That’s the only way for the plant protein category to live up to its market promise.

With a mission to shape the future of good food, Bits x Bites has invested in companies advancing chickpea protein concentrate for animal-free foods, gene editing for high-performing crops, as well as a company advancing non-GMO meat production directly from animal cells without an actual animal. Learn more at www.bitsxbites.com.