Meet Yang Tiancai: Muscular dystrophy did not stop him from building a successful online business

Meet Yang Tiancai: Muscular dystrophy did not stop him from building a successful online business 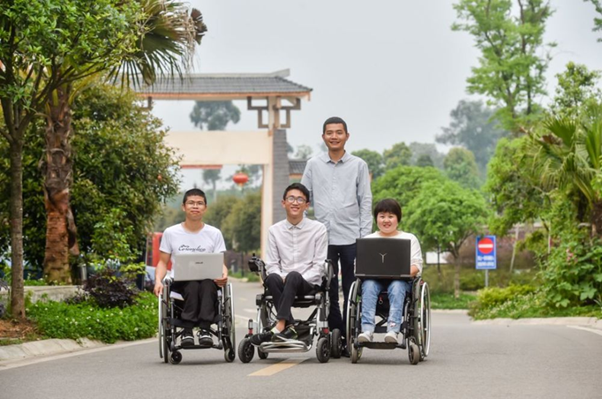 · E-commerce has created opportunities for small businesses to flourish

When he was six, the muscles on Yang Tiancai’s legs began wasting away, leaving the boy progressively unable to walk. Doctors said he might not live beyond 18.

Wu Yun lost all hearing in one ear after taking some cold medication when he was young. He uses a hearing aid in the other ear.

Now 26 and 31, respectively, Yang and Wu run an e-commerce business and have sold more than 100 million yuan ($14.3 million) worth of fruit on Pinduoduo, the country’s leading agricultural online marketplace. The media and various organizations have lauded Yang as an inspiration and role model for other youths.

But the road to today’s business achievements was anything but smooth for the two from Pujiang county in Sichuan.

Mocked and bullied by his classmates for his physical disability, Yang withdrew into himself and finally quit school when he was 14. He did not step foot outside his home for years and shut himself in his room. Howls of frustration and frequent chest beatings would emanate from behind the door.

Like Yang, Wu avoided human contact because of his difficulty hearing what other people are saying. Even though he graduated from university, he found it hard to find a job because of his disability. In 2012, he started his own supply chain business serving the e-commerce industry.

Things began to turn for the better after their fathers, who worked as agents in the fruit wholesaling business, introduced Yang and Wu to each other online. The two youngsters hit it off instantly, both sharing a love for astronomy and physics.

Under Wu’s encouragement, Yang started an e-commerce business selling fruits. Yang’s father helped purchase supplies, while his mother helped pack and ship the products. At the end of 2015, sales reached 1 million yuan. The next year, the company’s sales hit 3 million yuan. Yang’s parents sold their house in 2017 for about 400,000 yuan. They borrowed another 200,000 yuan from relatives to fund the expansion of their son’s business.

By early 2018, the two friends had decided to merge their businesses. They went to Chengdu, the provincial capital, to learn about e-commerce. It was there when they realized the importance of branding and decided to create the brand “Let’s Go Together,” a nod to their disabilities. They also set their company’s mission to help more people with disabilities to earn a living and gain self-sufficiency.

“We are both disabled, and due to my mobility problems, Wu Yun takes care of my travel,” Yang said. “He has difficulty in hearing, so I help convey what people say to him. In a sense, I am his ears, and he is my legs.”

Instead of spreading their bets on different e-commerce platforms, they decided to focus on Pinduoduo. The e-commerce upstart had been expanding rapidly in rural China with its direct-to-consumer model. Business for “Let’s Go Together” boomed and reached 100 million yuan in sales in 2019. Besides selling red-heart kiwi and mandarin oranges, the local Pujiang specialties, they also sold apples from Sichuan, Yunnan and Shanxi and Shaanxi provinces.

“Others try every platform, while we concentrate on this platform only, seeking stability and excellence,” Yang said. “During the most exhausting time, I didn’t sleep for two or three days, and in about a month, I lost 13 kilograms and weighed only 72 kilograms at one point.”

E-commerce has grown rapidly in the past decade in China, bringing not only convenience to consumers but also empowering small businesses and creating jobs. The Internet Society of China estimated that the e-commerce market exceeded 2 trillion yuan in 2019, employing over 48 million people.

“Let’s Go Together” hires people with physical disabilities, like Chen Guangxiang, who lost his legs to a construction site accident. Another employee, Zhou Miao, lost her ability to walk due to a car accident. Both work in customer service, answering queries from potential buyers. They make a monthly salary of more than 3,000 yuan. Occasionally, the company sends someone to visit their homes to conduct training and update their skills.

“I was in bed for seven, eight years, and felt I was useless,” Zhou said. “Now it’s different. It feels good to be able to support myself.”

When the going gets tough, Yang and Wu will go for a ride, windows wound down, the wind in their hair. Sometimes, they would drive into the mountains and go stargazing.

“Before the star-filled sky and profound galaxy, I feel the insignificance of humankind,” Yang said. “But at the same time, a purity of heart.”