Meet Liu Xing Jia: He defied his father to set up a successful condiment business

Meet Liu Xing Jia: He defied his father to set up a successful condiment business 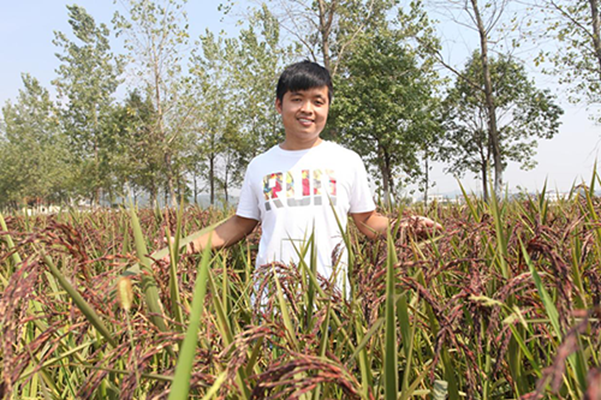 This is part of a series profiling ordinary people whose lives have been changed by Pinduoduo.‍

‍Name: Liu Xing Jia, 34, an entrepreneur who persevered and brought the fruits of agri e-commerce to his village.

This is his story, as told to us at Pinduoduo.‍

It all began with friends and family mocking my idea of purple rice, a grain I wanted to grow in my hometown of Ningxiang in Hunan province. They thought it was ridiculous that I wanted to throw away a job in the city of Changsha where I earned a yearly salary of about 200,000 yuan.

“Your parents put everything they had into raising you so you could leave this and have a better life in a big city,” they said. “And now you want to come back home to be a farmer?”

Everybody wanted to mind my business. But what bothered me most was how vehemently opposed my father was to me returning home, despite my mother’s efforts to reason my ambition with him.

But I was just as adamant. Even though my relationship with my father was at an all-time low, something told me that if I didn’t take this step now, I would lament for the rest of my life. The Chinese government had implemented a policy to promote agricultural businesses, and I felt this was my calling.

I invested 300,000 yuan from my own savings and signed a contract to lease 400 acres of farmland in my hometown.

Purple rice has a notably higher nutritional value than white rice, and that meant providing a premium product to the urban market, which has a demand for high quality and healthy agricultural produce.

50K from wife down the pipe

I grew and harvested to my heart’s delight. Our crops had a unique purple color, and I was confident they would sell well.

Yet, throughout the first year, the volume of sales was extremely low, and I made a loss of 200,000 yuan.

My wife, who had been with me for 10 years since our university days, lent me 50,000 yuan from her savings and urged me to carry on. But that too got used up very quickly, and I started getting frustrated with my failure.

I even started an account on the Pinduoduo app in early 2017 but didn’t have the bandwidth to manage it, and closed it quickly because I read some negative reviews. Turns out 2017 was one of the most lucrative years for sellers on Pinduoduo, and I regret missing out because of my folly.

But I remained optimistic, wondering what else I could do.

It was at this time that I met two men, just like me, who had quit their city jobs and returned home to the village to try something new. One was a photographer and the other had dabbled in e-commerce. The moment they heard of my venture to work with agricultural produce in the village, they were ready to join hands.

With three of us now involved, it rekindled new hope and renewed confidence in me.

It took a delicious dinner one night for us to pivot out of purple rice into packaged condiments.

The dinner was served to us by a local farmer’s family, and along with the rice, we ate the tastiest side dish ever — a spicy, unsweetened condiment from our own Hunan province, called ‘Waipo Cai’, which translates to Grandma’s Dish.

The vegetable used as a main ingredient in this side dish was grown by this local farmer. Before I knew it, we were discussing the possibility of using their produce to make this condiment in our village, and then selling them in jars to cities.

We brought some samples of the vegetable to a local processing factory to check if the condiment could be mass produced. The factory manager was just as sold about the idea as we were, and so, our team of enthusiastic partners grew stronger.

Together, we all borrowed and plowed in 200,000 yuan into the business of making tasty side dishes bottled up in jars.

E-commerce was no longer an alien concept since we had a partner on board with expertise, so we opened an online store on Taobao to sell the condiments. There was a lot of labor and work involved as sales grew, and by the end of 2017, our jars were soon selling out.

We hired more people and produced more. The sales were good but not flying enough to receive accolades from family, not least from my disgruntled father.

It was also the time when advertisements about the Pinduoduo app were everywhere, and we were hearing stories from many small entrepreneurs about the support they received from the platform and the unexpected success they were achieving.

And so, in March 2018, I reopened the Pinduoduo account that I had deactivated a year ago. The results were immediate and the factory was soon more busy than we envisaged.

We got an unexpected boost to our business through a social media promotion message by Pinduoduo six months later for our product, and what ensued was a massive volume of orders for our condiments.

The factory owner who trusted our idea continues to be impressed by our passion and sincerity, and by the 10 million yuan on average that the factory now makes every year.

Keeping the faith — from rice paddy to online condiment sales

Times are good for me, but I know I can’t get complacent as many people depend on our efficiency and delivery, so I go to the factory every day to ensure the supply chain among distributors is maintained.

In less than two years, our product is one of the best-selling packaged condiment on the Pinduoduo app. Our operations have moved from a small workshop to a large warehouse. We sold a total of 300,000 units in six months after joining the Pinduoduo platform, generating revenue of 3.7 million yuan, which is well above what I had expected.

I have a staff of 50, both young and old from my village, who are proud to work in a factory that sells premium local produce to cities all over the country.

It gives me great pleasure, too, to give back to my hometown, by providing the locals with employment, with insurance and more than 3,000 yuan per month — a comfortable salary for most. Their well-being is what had sparked my interest in returning home. In the future, I hope to purchase more local and healthy agricultural produce made in Hunan and sell to all of China.

When I look back, I am proud I believed in my dream, and I am grateful my wife did too, which makes us enjoy our new 1000sq-meter house even more in my hometown.

People are proud of my achievements and very supportive. And I think my father is somewhat proud too.