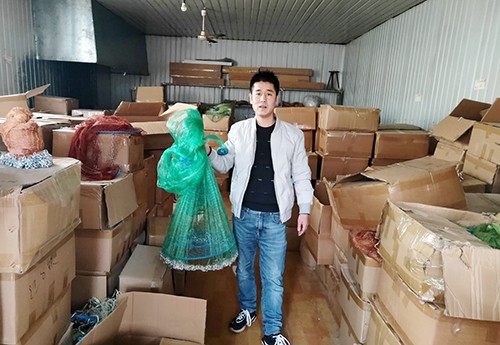 This is part of a series profiling ordinary people whose lives have been changed by Pinduoduo.

Name: Guo Kang, a former factory worker-turned-business owner selling fishing nets. This is his story, as told to us at Pinduoduo.

One morning in February 2017, I was on a break from the factory assembly line when I looked at my phone and saw seven missed calls from my mother. I had a bad feeling that something was wrong and immediately called her back.

“Something’s wrong with your dad’s heart. Can you come home?” my mother asked, her voice trembling. I stopped what I was doing and rushed home.

We sent my father to the hospital and fortunately he was able to get treatment before the condition deteriorated further. But even so, my parents spent all of their savings on the treatment and had to borrow heavily from their friends to pay the medical bills.

My father was discharged and his health improved with follow-up treatment, but the future felt uncertain and we were ill at ease because of the debts we had run up. My parents had been supporting themselves over the last few years with a meager income, while I spent my days working long hours for a low wage. I felt ashamed that I couldn’t offer my own parents even the most basic financial security.

To make matters worse, I was laid off by the factory. I could not bear to tell my mother and sought work through various job-seeking websites. But it was hard to compete with university graduates when I had only finished junior high.

One day, my friend sent me a Pinduoduo link, which gave me an idea. One of my relatives had a factory that produced and sold fishing nets. Perhaps I could work with them and try my hand at e-commerce.

One of my friends tried to dissuade me when he learned of my plan. “You don’t understand anything about e-commerce, and there’s a chance you could lose more money than you’ll make,” he said. “Why don’t you join me and just drive a cargo van and do deliveries?”

I turned him down. My father’s illness had made me realize that scraping by day to day is not enough. If you want to live with any peace of mind, you need to at least have enough savings to get through an emergency.

But my friend’s well-meaning warning woke me up to the risks of plunging blindly into business. So I decided not to take any action immediately and spent about a month gathering information on and learning about e-commerce.

There was a huge trove of information on e-commerce on the internet, some useful and some misleading. Many marketing websites claim that they can teach you how to make it big in business, but are really just trying to make money from you by getting you to pay to join a class.

I wasn’t fooled, because I didn’t even have the money to be fooled. All I could afford to do was download the Pinduoduo app and learn how the shopping platform works by myself.

After a period of trying to figure things out, I eventually gained enough confidence to open my store. In April 2017, the Tong Hai Fishing Supplies shop opened on Pinduoduo, selling stock made by my relative’s factory.

From the time the store opened until the end of November, there was not a single inquiry. But one day at the start of December 2017, I heard a ding dong sound — it was my first ever pending group order in e-commerce. I was so excited that day that I couldn’t sleep. After that, the orders began to trickle in, perhaps because the merchandise was cost effective or filled a niche, or because there wasn’t much competition.

As summer approached in May 2018, we entered the peak season for fishing net sales. I removed the stock that did not sell well and replaced them with new models of higher quality and functionality. In the early days, we didn’t have much money to invest in promoting our products in the early days, and we put a combined 200 yuan per day into search ads and in-feed ads. After about 10 days, the return on investment reached around 12%.

When summer came around, we gradually increased our investment into advertising from the initial 200 yuan per day to 400 yuan, and then again to 800 yuan. The units we sold accordingly increased from 40 units per day to 100, and then to over 150 per day. When our products had enough customer reviews, the volume of sales stabilized at around 9000 units per day, and we attained the №1 ranking in our product category.

After our hard work in 2018, we made around 2 million yuan in sales. Although this may not be much compared with some of my peers in e-commerce, it is a good amount for me. Throughout 2019, we continued to steadily increase sales.

Nothing in business is predictable, and there is always a chance that people who engage with a product or service will be dissatisfied. When I was expanding my store and everything seemed to be going smoothly, I came across my first customer complaint. Due to it being peak sales season at that time, shipping times were much slower than usual, which caused customers to complain. I had to take the best-selling products off the shelf for seven days, which led to tens of thousands yuan in losses. After more than a month and a half, things slowly began to pick up again.

I was very annoyed when I first encountered the complaint, thinking that the customer did not understand. I later realized, however, that this platform has high requirements for merchants, and holds them accountable to build trust with their customers and ensure high-quality services. An online sales business can only expand so long as the platform offers a solid foundation of loyal customers; therefore, we must proactively provide our customers with excellent service.

As of the new year of 2020, we have gotten a new larger warehouse, and we hope that store orders will continue to soar this year. We will keep doing our best without forgetting our original intent.

I have gone from being a powerless, nameless worker who could not repay his debts, to a full-fledged businessman who successfully sells niche products online.

I hope that all young people who have fallen upon adverse times like me are able to find their own way and make a success of themselves.