How China can cut emissions from its farms

How China can cut emissions from its farms 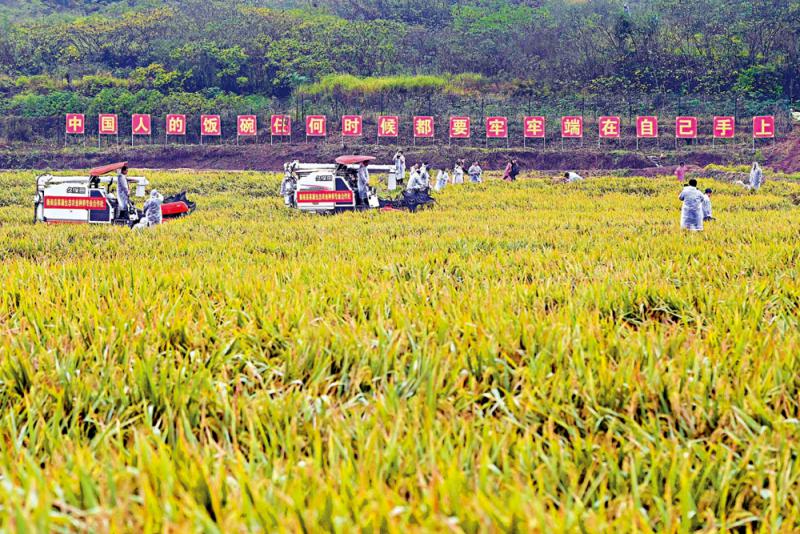 In September last year, President Xi Jinping announced that China would aim for peak carbon by 2030 and carbon neutrality by 2060. A month later, the report from the Fifth Plenum of the 19th Party Congress described carbon emissions “gradually declining after reaching a peak” by 2035 as a “core long-term goal for socialist modernization”. These changes indicate the huge climate ambitions of the Chinese government, and also place new demands on the agricultural sector, which now has higher standards to work towards.

Agriculture is a key source of greenhouse gases, with arable and livestock farming accounting for 10-12% of global emissions of carbon dioxide equivalents (CO2e). China farms 9% of the world’s arable land and provides 20% of the world’s food and fibres (such as cotton). As such, agriculture naturally accounts for a significant proportion of its emissions.

Rice farming and the use of nitrogen fertilizers are the biggest sources of methane and nitrous oxide emissions respectively, accounting for 40% and 47% of national emissions of these gases.

Efforts to cut China’s agricultural emissions form a two-pronged approach: reducing emissions from fertilizer use and from agricultural waste; and improving the ability of the soil to sequester carbon.

Large quantities of greenhouse gases are released during fertilizer manufacturing, with China’s nitrogen, phosphate and potash fertilizer manufacturers emitting twice the average for the European Union and United States. In addition, about 1% of nitrogen fertilizers spread on fields is lost as nitrous oxide. The sector’s efforts to cut emissions and protect the environment have therefore long focused on reducing fertilizer use.

Since 2005, the ministries of finance and agriculture have been running a program to test soils and formulate fertilizers based on exact needs, with almost 8 billion yuan (US$1.2 billion) of government investment. The scheme has helped 200 million farmers working 1.5 billion mu (100 million hectares) of land. They have increased the efficiency of fertilizer use by 5%, reduced usage by 10 million tonnes and avoided the emission of over 25 million tonnes of CO2e – all while increasing grain harvests by 6-10%.

In 2017, as part of efforts to ensure environmentally friendly practices are also profitable, the government started a five-pronged push to develop green agriculture. This included replacing chemical fertilizers with organic compost made from fruits, vegetables and tea, and resulted in reduced fertilizer use, increased farm incomes and higher levels of carbon in the soil.

These combined successes point to huge opportunities for further emissions reductions. Research has shown that better fertiliser application and the use of new types of fertilizers and inhibitors (such as slow-release fertilizers and nitrification inhibitors) can reduce nitrous oxide emissions from farmland by up to 50%. Taking the 60 million tonnes of chemical fertilizer used in 2015 as a baseline, the government’s current plan to reduce fertilizer use by 10% would avoid the release of over 18 million tonnes of CO2e.

Cutting fertilizer use is hugely important, but improved management of agricultural waste could be a better method for reducing emissions. It not only has commercial potential, but also improves the health of the soil without wasting chemical fertilizers, and increases overall efficiency within the system by recycling. The most important types of waste are straw left over after the harvesting of cereal crops and manure from livestock.

Chinese agriculture produces as much as 1 billion tonnes of crop straw every year, and it was once common for this to be left as stubble in the fields and burned – a practice the government has clamped down on since early in the 2000s. According to the national GHG inventory, crop stubble burning released 9 million tonnes of GHG every year prior to 2012. That year, the government launched the green energy demonstration counties project, providing subsidies for the use of straw and other agricultural biomass as fuel.

According to the Medium- and Long-Term Development Plan for Renewable Energy, by 2015, China produced about 10 million tonnes of biomass fuel pellets, mainly from straw, and that figure was expected to reach 40 million tonnes in 2020. With two tonnes of straw able to substitute for one tonne of coal, this could reduce emissions by 150 million tonnes of CO2e. With financial support from the Ministry of Agriculture since 2015, straw is also being used as compost and fodder, and in other ways. Utilization rates have reached over 80%, meaning a significant contribution to avoiding emissions.

Although the utilization of straw in China is now quite high, there is scope to improve its use in agriculture. About 20% of straw is still being wasted, and 40% of what is used is only processed at a very basic level before being returned to the fields. To prevent the spread of disease or pests harming the next season of crops, and to save farmers the trouble of processing the straw themselves, methods to convert straw into biochar away from the field have been developed. China is now a world leader in straw carbonisation, the use of biochar to improve soil, and carbon-based fertilizers. Fertilizers containing 15-20% biochar can reduce chemical fertilizer use by 15% and improve both crop yield and quality, while reducing farmland greenhouse gas emissions by over 20% and making farming more eco-friendly.

Using the process of pyrolysis – the thermal conversion of biomass in the absence of oxygen – to carbonize the 60% of straw that is currently either not used or returned to the fields after basic processing for use in biochar fertilizer would significantly increase soil carbon and reduce the use of chemical fertilizer. Add in the emissions avoided by the utilization of bio-gas produced during the carbonization process, then as much as 500 million tonnes of CO2e could be sequestered – offsetting 60% of all China’s agricultural GHG emissions.

It is also worth noting that straw rotting in the fields is the main source of methane emissions from rice farming. Converting rice straw to biochar before returning it to the fields avoids the release of methane during anaerobic breakdown, and the char promotes oxidization of methane, further reducing emissions. Water-saving methods of rice farming can also reduce emissions, but often lead to soil acidification, increasing the availability of heavy metals, in particular cadmium, which impacts food safety.

Converting straw into biochar clearly has multiple benefits, and with the continued improvement of China’s carbonization technologies, the practice is bound to make an important contribution to meeting the country’s carbon peak and carbon neutrality goals.

However, controlling greenhouse gas emissions from livestock manure remains a huge challenge. In 2014, these accounted for 18% of all agricultural emissions, and intensity of methane and nitrous oxide emissions per animal was four times that of 1994. The Ministry of Agriculture has identified the utilization of livestock manure as a key task for the development of green agriculture, and there is huge potential to reduce emissions here. But less research has been done on this than on arable farming, and the data to show what actual contribution better manure management could make to overall emissions is not available.

Furthermore, industrialized livestock farming creates large quantities of manure, usually at locations far from arable land. Issues requiring solutions include the shortage of land on which to spread the manure, the lack of a market for products produced from it, and how to meet ever-tougher environmental requirements.

Based on the above, we calculate that increasing carbon in the soil, reducing fertiliser use and using straw for biochar and other purposes could reduce China’s agricultural emissions by a total of 540 million tonnes of CO2e. Add in the potential of agricultural biomass energy generation, and that figure could reach 700 million tonnes. That might only be 7% of China’s GHG emissions from the energy sector for 2014, but it is already the equivalent of all emissions from the agricultural sector for 2010. And better management of livestock manure could achieve even more.

As a responsible developing nation, China is an active promoter of the reduction of agricultural emissions and has valuable experience in doing so. In 2007 the Ministry of Agriculture listed 10 key agricultural and rural technologies for saving energy and reducing emissions, including the use of straw and manure. 2009 saw the launch of a series of programmes supporting the development and application of agricultural technologies and approaches designed to combat climate change. In 2017, agricultural low-carbon and emissions-reducing technologies were included on a list of key low-carbon technologies issued by the National Development and Reform Commission. And over the years, national agricultural development plans have directly or indirectly worked to bring about early peak carbon and carbon neutrality. With the Ministry of Agriculture fully implementing government thinking on the environment, the sector’s contribution to reaching peak carbon and carbon neutrality is set to increase.

We have the confidence to join the government’s quest for a 2030 carbon peak and 2060 carbon neutrality, and believe that green agriculture in China has a bright future!

The above essay was first published on China Dialogue and can be found here.

Dr Cheng Kun is an associate professor at the Institute of Resource, Ecosystem and Environment of Agriculture at Nanjing Agricultural University. His research focuses on greenhouse gases inventories and carbon accounting in agriculture.

Dr Pan Genxing is chair professor of the Department of Soil and Science, and a leading scientist at the Institute of Resource, Ecosystem and Environment of Agriculture at Nanjing Agricultural University. He has served as an active expert for the IPCC, the UNEP, the FAO and SCOPE, as well as for the Chinese government, with a focus on soil carbon, greenhouse gas and climate change mitigation in agriculture.