From coder to top pomelo seller: One son's journey to take over the family business

From coder to top pomelo seller: One son's journey to take over the family business 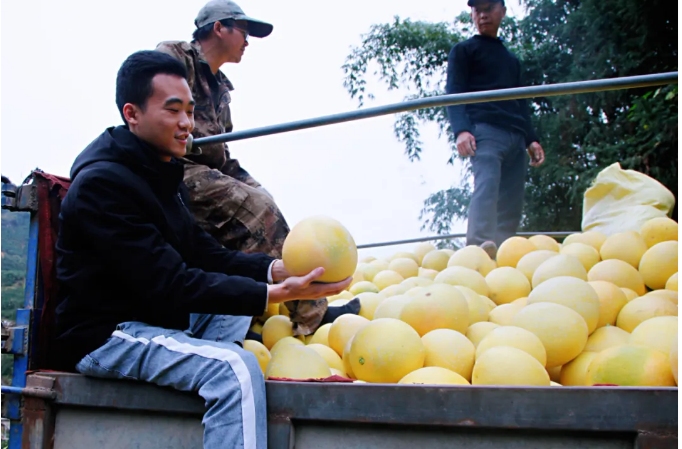 Very few people would give up a job with an internet company in a big city to go home to the countryside to sell fruit. But that’s exactly what Chen Zongyou did when he quit his job as a programmer and returned to Pinghe County in Fujian province to join the family business.

Many of his relative were surprised by the decision. Chen himself harbored doubts, which were exacerbated when he found himself working alone in a warehouse in the mountains, with only pomelo trees to look at.

Although depressed at the beginning, Chen stuck at it. He knew the place was full of fruit, abundant in bananas, green dates, carambola and more. In particular, he knew that the local pomelo, with a planting area of more than 800 thousand Mu and an annual output value of nearly 10 billion yuan, had a bright future.

Last year, Chen’s shop on Pinduoduo’s e-commerce platform achieved a breakthrough with thousands of orders and a turnover exceeding 50 million yuan (US$7.73 million), making it the top seller in the pomelo category.

His journey from coder to No. 1 pomelo seller has its share of ups and downs.

In 1988, his father traveled alone to Shenzhen, the coastal boomtown opposite Hong Kong, and started to sell the fresh pomelos produced in his hometown.

From a small street stall to home delivery with a trolley, his father grew his Shenzhen fruit business, becoming a supplier to the Baiguoyuan fruit juice company for many years.

Chen grew up with his father in Shenzhen until his admission to Xiamen University. After graduating in 2017, Chen went into computing but later gave up his position as a programmer in an internet company. He decided to go home and sell pomelos with his father but using a different method – e-commerce.

It was a prescient move as the shift in consumption behavior meant more people were buying fruits online. The migration online also opened up demand from all over the country. At the same time, his father’s offline business shrank substantially, with sales volumes half of the online business, leading to an excess of inventory and millions of losses.

Even though his father had been in the fruit game for decades, the difficulties with the offline business were a sign of changing times. Data from the postal sector in Pinghe County shows that online orders of local pomelos have exceeded total output by 50% since 2018, and the trend is expected to continue.

“Personally, I feel very lucky that I can build on my father’s efforts and bring new success with e-commerce – this is an achievement,” Chen said. “Each generation has its own set of obligations and it’s now time for a younger generation to take on the burden of our parents and continue to struggle on the road of agriculture.”

Pinghe County, a small place in the mountainous area of southern Fujian, is only 90 kilometers away from Xiamen. However, it misses out on many national trends because of its remote geographic location. Even ice-cream and tea brand Mixue Bingcheng, expanding aggressively in the wider region, did not think of opening its first shop in Pinghe until last year.

Having grown up in Shenzhen and worked as a programmer, Chen had reservations about returning to the family fruit business knowing that many of his former college mates had gone on to work for big internet companies in Beijing, Shanghai and Guangzhou.

On Chen’s initial return, Chen’s father hoped his son would take over the business by working on its traditional offline distribution model. But Chen knew that after decades of hard work, the traditional offline market had become saturated, and that the future was e-commerce.

Chen tried various online models, such as WeChat business, online stores, and other distribution channels for over three years. He also went to Yiwu, the gigantic wholesale market, to study for two months, but conditions were still lukewarm, with only a few orders coming in on slow days.

But through persistence, a turning point was reached in 2019. In October that year, Chen discovered Pinduoduo and became a supplier for Duo Duo Orchard. The daily sales volume of the store soon reached 6,000 to 7,000 orders. In less than three months, he sold more than 1 million boxes.

By comparison, it took Chen’s father more than three months to sell 1 million cases the traditional way, showing the explosive power of e-commerce channels. As a result, his father’s attitude changed, and there was no longer any hesitation in pushing more fruit his son’s way. But Chen still had a fight on to change his father’s approach completely – and he did not relent until the business faced a crisis.

Mid-Autumn Festival is traditionally a big time for sales of pomelo produced in Pinghe County, and 2020 was no exception. As usual, Chen’s father began to buy in on a large scale, and then wait for the market price to go up before selling.

But last year’s sales were depressed by early supplies of pomelo from the Hainan and Guangxi production areas, seeing prices of around 3 yuan per catty decline to 80 cents per catty. In the later stages, dealers were not even willing to buy his father’s Pinghe pomelo for even a few cents.

Despite a strong effort, and daily sales volume on Chen’s Pinduoduo shop hitting 30,000 orders, Chen’s father still lost millions in the end, making it the biggest loss of his career. “I’m old,” said his father.

Chen knew that the traditional mode of selling agricultural products was a bit like the stock market and subject to supply and demand imbalances because information is not fully transparent. With e-commerce, information is updated quickly and “group buying” can provide a large number of stable orders, thus providing more certainty for the entire industrial chain. Chen says the enhanced information flow of e-commerce also helps him to reduce costs.

After earning his first “pot of gold”, Chen’s father invested in the construction of a pomelo-sorting line in Pinghe County, which integrated fruit washing, sorting and weighing into one. The whole warehouse covers an area of more than 8,000 square meters and can sort up to 2 million catties of pomelo in a single day, greatly improving production efficiency.

Chen also visited Hunan, Chengdu, Guangxi and other places to investigate the local packaging, processing and logistics operations of people there. Chen finally chose a carton supplier from Guangxi and chose Changsha as a logistics center for his business – drawing on the distinct advantages of each region.

By controlling each link in his supply chain, Chen can purchase high-quality pomelo at a low price and sell it to consumers via his platform at a higher price. He has developed a reputation as a high-quality seller among users and won several platform awards.

In 2020, the annual sales volume of Chen’s Pinduoduo store is expected to exceed 50 million yuan, ranking number 1 in the pomelo category, and making Chen the youngest e-commerce star in Pinghe County.

This year’s pomelo season is approaching and Chen has a new plan. In recent years, amid increasing annual yields of pomelo from Hainan, Guangxi and Sichuan, the domestic market has become saturated with prices falling. It has become extremely hard to make any profit at all.

“Pomelo farmers have been planting pomelo for a year. It should be a bumper harvest, but their income has declined instead of increasing,” Chen says. To try and solve this dilemma, Pinghe locals have tried to introduce several new varieties under the guidance of the Fujian Academy of Agricultural Sciences.

Chen believes there is a future in going down the “origin brand” route. There is a small stream in Pinghe called “Guanxi” and the pomelo that grow near the stream are the best, creating the “Guanxi Honey Pomelo” brand. However, dealers often counterfeit it, undermining brand value.

“Only by building the brand can we improve the profit space of pomelo, and the key is to integrate the supply chain,” Chen says.

Gao Junxian, who graduated from Fujian Agriculture and Forestry University with a bachelor's degree, is one of Chen’s business partners and the eldest brother in his young team. He has many years of supply chain operation experience and is now integrating the upstream supply chain of Guanxi Honey Pomelo.

Over the past decade, Wang has worked in almost all agricultural areas in China, making him a solid supporter of agricultural standardization and branding.

Wang believes that only by ensuring the profit space of farmers can the healthy development of the whole industrial chain be ensured.

After hearing Chen’s idea, the two sides immediately hit it off and prepared to join hands to launch a brand defense of “Guanxi Honey Pomelo” during this year’s pomelo season.

“Agriculture is a hard industry. It’s not easy to do well,” says Chen, but no matter how difficult it, he is determined to be a second-generation fruit farmer and take on the baton from his father.