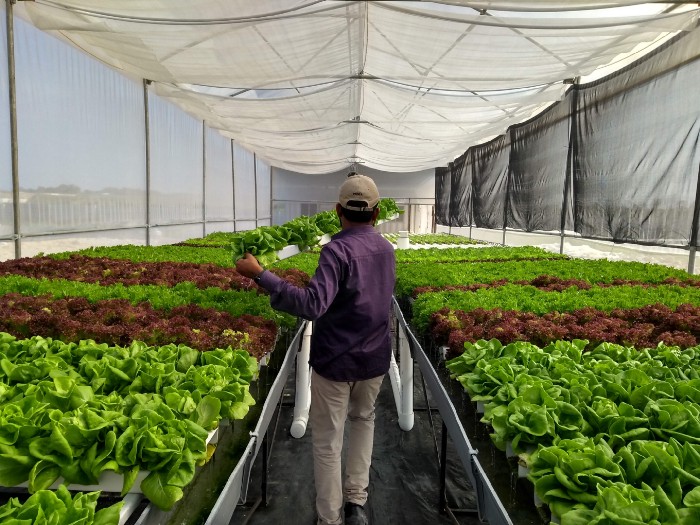 Nadine Keller, who runs a business out of Singapore selling do-it-yourself farming kits, has seen a significant uptick in sales with the spread of the COVID-19 pandemic.

“We have been inundated with enquiries,” said Keller, whose company, Aerospring Gardens, deals in vertical hydroponic systems that start from $45 for a simple kit to as much as $1,500 for an elaborate setup that can grow 27 plants.

Orders for Aerospring’s apparatus have increased 400% on Amazon.com since the outbreak as demand for homegrown vegetables rises in the United States. Demand has similarly surged in Singapore, a small country that imports 90% of its food.

Urban agriculture is moving beyond its usual exponents of retirees and organic purists during the COVID-19 pandemic to other city dwellers concerned that they will have to go without if the virus disrupts the supply of food.

So they are taking to their balconies and terraces to grow herbs, fruits and leafy greens, using everything from humble pots to advanced aeroponics and hydroponics systems costing thousands of dollars.

Perishables like vegetables and fruits do not keep well, unlike toilet paper or tinned food, so there’s little point of hoarding or panic buying. Agriculture also runs on a timetable, and any disruptions to planting, picking, processing and transportation could result in price spikes and in worst cases, supply shortages.

That scenario is becoming likelier by the day unless measures are taken quickly, according to the Food and Agriculture Organization of the United Nations (FAO), which warned of a “looming food crisis” with disruptions expected to take place as early as April and May.

The global “just in time” supply chain for food is being challenged by closed borders and lockdowns that prevent the movement of farm labor. Meanwhile, truckers are staying home and the severe retrenchment in air and sea freight capacity is raising transportation costs. Some countries have also taken to banning agricultural exports.

All this has driven demand for urban farming.

A school in Wisconsin, for example, is using a hydroponic farm, which was initially started as a student project, to help the community in the Wausau area.

“We’re going to ramp it up to 4,000-plus plants and make sure that our community doesn’t run short of the produce,” Agriscience teacher, John Glynn of the D.C. Everest School in Wisconsin, told U.S. media in March.

While governments have assured their respective citizens of adequate reserves, skeptics are concerned that rationing of food may be a reality in the near future.

In the U.S., a country that normally wastes almost 30–40% of its food every day, dairy farmers are finding it difficult to bring their milk and cheeses to grocery stores, and the shipment of meats and grains are declining in some parts.

With food supply chains breaking, pictures in social media of crops rotting in fields is adding to food security concerns.

“We are extremely happy that there’s a noticeable boom happening in growing your own food as a result of that but I feel this is one of the crisis-related topics that hasn’t gotten that much traction yet in most places,” said Martin Laidla, PR manager of Click & Grow, an indoor farming solutions company. “But that’s all understandable, as problems with food availability have not yet hit us very hard in most food categories in most countries (talking from the perspective of Western countries).”

Raising fresh fruits, vegetables and animal products in urban areas can improve local food security and nutrition, especially for underserved communities, according to Miguel Altieri, a professor of Agroecology at the University of California, Berkeley.

“The first step is increasing public awareness of how urban farming can benefit modern cities,” writes Altieri in The Conversation.

The COVID-19 pandemic may prove to be a wake-up call for urban farming. More than two-thirds of the world’s population is forecast to live in cities by 2050, according to the United Nations.

The pandemic has also generated curiosity about the origins of our food and the ever-increasing importance of organic produce. People are finding innovative ways to start farming at home.

“I’ve got a small selection of plants now because my usual working hours don’t leave me much time,” said Peter Pustovrh, who received his indoor Click & Grow garden as a present when he moved to an apartment in Ljubljana, the capital city of Slovenia. “But now, since the quarantine, I do have more time to work on my garden … however, I don’t enrich it since I realize I will have less time again when things go back to normal.”

In Asia, where many countries are evaluating border trade to feed their populations — Vietnam and Thailand have banned rice and egg exports, respectively — people are shifting gears to learn more about growing their own produce.

Demand for home-farming kits on Pinduoduo (PDD), a large e-commerce platform in China, surged in the first quarter with the coronavirus outbreak because of concerns about food supply during the quarantine period, according to interviews with five businesses selling the DIY sets.

China went into a strict lockdown in late January and February to contain the coronavirus, and only last week did it lift an 11-week quarantine of the city of Wuhan, where the outbreak was first reported.

“I’m always running out of basic herbs while cooking, and so I decided that some of these herbs must be accessible readily, hence I’m growing them at home now,” said Ma Cherry Trivedi, a businesswoman who, before the lockdown, would shuttle between Myanmar and Singapore for work. “Especially now-a-days, there may not be primary items that stores might carry, so better to have a growing stock.”

On her balcony in a tall apartment tower block in Singapore, Trivedi grows pots of herbs: curry leaves, cilantro, lime, chilies, spring onion, Italian basil, mint, tarragon, turmeric, ginger, rosemary and kenaf leaves. Most of them are known for their healing properties.

Singapore has an ambitious food security plan to produce 30 per cent of its agricultural needs locally by 2030, a project that has taken on increasing importance under the current circumstances.

“With borders closed down and impact on supply chain and so on, (that) has really brought this to the fore, and given the matter a bit more urgency,” said Karthik Rajan and Uday Mathapati, entrepreneurs chosen by the Singapore government to grow 800 tons of vegetables on five acres of land allocated to them in the city suburbs. “Everybody wants this to happen, as soon as possible.”

The farming project by Rajan and Mathapati, co-founders of LivFresh, a hydroponic farming service that assures pesticide-free produce, is part of a “farmland sales” program launched by the Singapore government two years ago. The goal of the program is to increase productivity of land on the island for farming by at least threefold from the current level by embracing new agricultural technology.

The government designated 12 plots for vegetable farming, said Rajan, one of which is being used by LivFresh to grow “nutritious and tasty” leafy greens, among other produce, which they hope will help cut back on the city-state’s reliance on imports from Malaysia, almost 70% of which is leafy greens — a staple used in salads, rice and soups by locals.

“We’re looking to expedite construction, but then we are also dependent on certain specialists, who are overseas in Europe and Australia, to be able to get some of this automation equipment going,” said Rajan.

Meanwhile, Keller and her husband, Thorben Linneberg, of Aerospring Gardens, are also waiting for equipment to arrive for them to cope with the increase in demand.

Her customers have been able to grow everything from lettuce, rosemary tomatoes, kale, mizuna mustard, red spinach to bak choy.

“It’s more sort of like what can’t you grow,” she said.