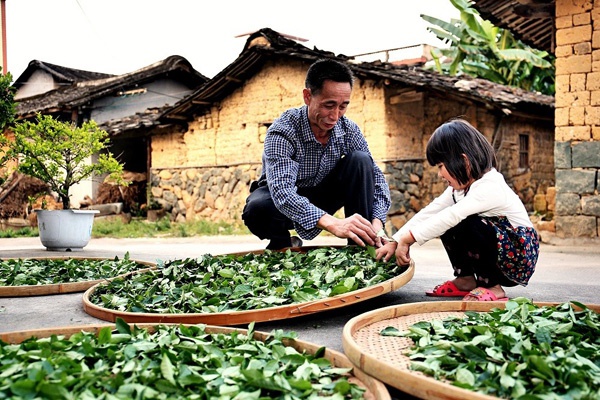 Tieguanyin is a type of premium Chinese oolong tea that originates and grows in the Anxi county of China’s Fujian province. Prized by tea connoisseurs, it’s one of the most expensive teas in the world, with some varieties selling for around 180,000 yuan ($27,500) for 500 grams.

It’s no surprise that such a prized tea will have inspired a variety of legends around it.

One such story includes the tale of how a young monk once asked the wise tea master Lao Cha: “Sensei, why is Tieguanyin such a famous tea? Why does everyone love it?” The master answered, “It’s because it takes a real master to produce this tea. The leaves have to go through so many steps: tossing, roasting, rolling and more. But once it’s ready — oh, how good it tastes!” He hands his disciple a cup. “Try this one — it’s so light and floral. It tastes like late spring itself.”

Another interesting legend surrounding the tea includes how it was discovered and given its name. The story begins in Fujian’s Anxi county, where there was a dilapidated temple that had an iron statue of Guanyin, the Bodhisattva of Compassion. A poor farmer named Wei would walk past the old temple to his tea fields and feel sorry for the terrible condition of the temple. Since he was poor, he couldn’t afford to repair the temple. What he did do was to sweep the temple every day and light incense to the goddess as an offering for many months.

One night, Guanyin appeared to him in a dream and told him about a treasure in a cave behind the temple. The farmer went to the cave and found a tea shoot which he planted in his field. The large bush that grew produced fine tea, which he sold under the name Tieguanyin, or Iron Bodhisattva of Compassion. The sales of the tea made Wei and his neighbors so prosperous that they were able to repair the rundown temple of Guanyin, after which it became a beacon of hope for Anxi.

To make the perfect cup of Tieguanyin is a long and complex process. After the leaves are harvested, they are laid out to release the excess moisture. The leaves are then tossed to break down their cell structure, which oxidizes the leaves to create the rich flavor of the tea. After that, the leaves are withered while being stirred and roasted in a hot pan, then they are rolled into tiny balls before being dried to stop oxidation and preserve the tea.

Tieguanyin is also known for its many health benefits. It has polyphenols that can fight aging and burn fat. The tea is also abundant in selenium, which can stimulate immune proteins and antibodies that can prevent cancer. There’s also rich amounts of fluoride in the tea, which can protect the teeth against tooth decay.

In January 12, 2020, 10 leading Tieguanyin tea producers from Anxi joined the “Anxi County Tea Industry New Brand Alliance” with e-commerce platform Pinduoduo, an initiative that was supported by the China Tea Marketing Association and the Anxi government.

The alliance was aimed at upgrading the traditional tea industry, make healthy, tasty, and inexpensive premium tea for everyone through measures such as direct production-sale connection, resources support, research and development and digital empowerment.

The partnership between Anxi Tieguanyin and Pinduoduo connects traditional culture with a new emerging consumption market. E-commerce platforms have become a key driver for the growth of sales of Anxi Tieguanyin.

“As a new e-commerce platform launched recently, Pinduoduo has a strong influence on the young consumer market,” said Chen Jiayong said, company representative of the Alliance and Chairman of Yunling Tea. “Our partnership will expand the market for our company and the region, and enable consumers to enjoy green, healthy and pure Anxi Tieguanyin.”

During the partnership with leading Tieguanyin producers in Anxi, Pinduoduo analyzed huge amounts of consumption data and gave feedback to the tea producers. The e-commerce giant also gave suggestions on how to improve the size, packaging, and price of the tea companies’ products. Pinduoduo also helped establish a new brand image of “quality tea is not expensive” among consumers.