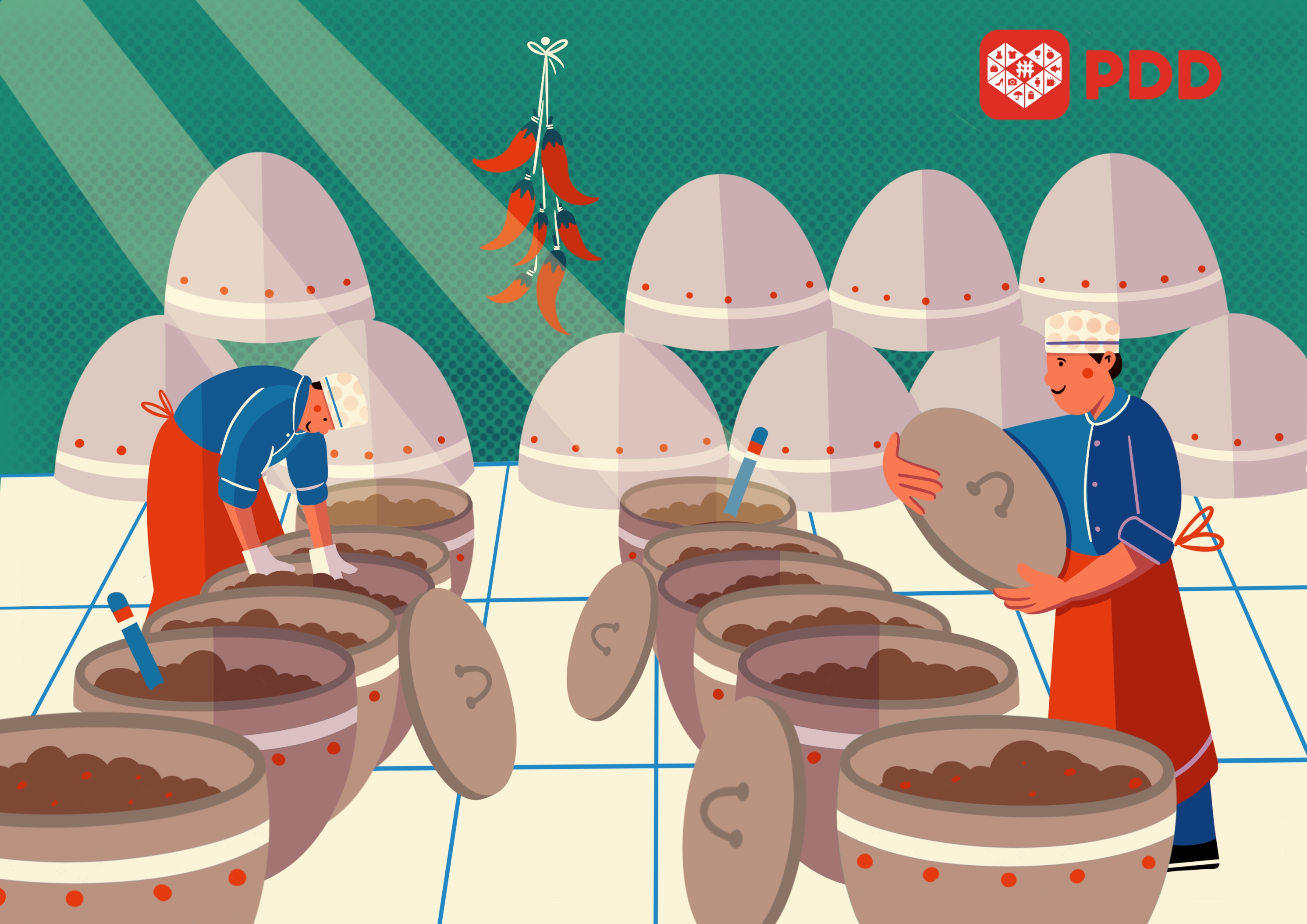 In this new series on China’s geographical indications, we dive into the history and culture of some of the country’s most beloved agri-food products. Today, we look at Pixian Douban, a fermented bean paste from Sichuan.

If your taste buds are captivated by the tantalizing aroma and the mouth-tingling heat from Sichuan dishes, you ought to know that they owe their “soul” to a fermented bean paste called doubanjiang.

And the most famous doubanjiang comes from Pixian in Chengdu, capital of Sichuan province. The paste is used in dishes like mapo doufu (spicy bean curd), yuxiang rousi (sweet-and-spicy shredded pork), and is good for just about any stir-fry.

“Sichuan cuisine and Pixian Douban are inseparable,” said Zheng Anqiu, an expert craftsman who has made the bean paste for more than four decades.” Without Pixian Douban, it’s impossible to make perfect Sichuan dishes.”

Pixian Douban is not only listed as national intangible cultural heritage since 2008, it is also one of 200 geographical indications (GI) protected under an agreement between China and the European Union that came into effect in March 2021. A GI is a sign used on products that have a specific geographical origin and possess qualities or a reputation that are due to that origin.

Being listed as a GI has helped sales of Pixian Douban, which has become a pillar industry in the area, creating jobs for more than 15,000 people, according to official data.

Like with many of the world’s top culinary treasures, doubanjiang owes its existence to that gift from nature: fermentation.

The story goes that a man named Chen Yixian moved to Pixian during the mid-17th century with a bag of broad beans to stave off hunger. On the way, the beans molded, but Chen decided to try to salvage them by drying them in the sun and mixing them with chilies and salt.

The result was a paste that has since been refined over more than 300 years to become today’s Pixian Douban. Till today, doubanjiang is made with five ingredients: broad beans, red chilies, flour, salt and water. The finest bean paste, with its spicy taste, mellow smell and bright red color, can take three or even five years to make.

Scaled production can be traced back to 1803, when descendants of Chen began to develop and produce bean paste under the Shun Tian Hao brand. Fifty years later, Chen Shouxin, another Chen descendant, started a new brand, Yi Feng He, and began to mix broadbeans and flour for fermentation, and combined them with salted red pepper. This has become the standard production technique of authentic Pixian Douban.

From the 1910s to 1940s, the annual output of Pixian Douban reached 200,000 kilograms. Today, the Juang Cheng brand under Yi Feng He is still considered by many foodies to be the gold standard for doubanjiang.

Pixian, located on the Chengdu plateau on the upper reaches of the Dujiangyan irrigation area, has a flat terrain, fertile land and rich water resources. Its warm and humid climate and unique geographical environment provides superior natural conditions for the production of Pixian Douban.

According to Zheng, the master craftsman, authentic Pixian Douban must include erjingtiao chili, sourced from Pixian and the surrounding areas, and broadbeans from east Sichuan or neighboring Yunnan province.

The first production step involves soaking and de-shelling selected broadbeans and mixing them with flour. Then the mixed broadbeans are put into a room stored with starter culture called Qu, where the broadbeans will develop a sweet flavor after about two months. The entire fermentation process lasts for more than six months.

While the broadbeans are fermenting, the erjingtiao chili will be crushed and added with salt and fermented too. After that’s done, workers will mix erjingtiao with broadbeans in a particular ratio, sun-dry the mixture to allow for a further fermentation of three months.

“The production process of Pixian Douban is unique in that you need to stir, sundry, cover, and expose it to the dew at night, and you also need to constantly crush it with a wood stick,” said Zheng. “To make our top-class Douban, workers would repeat this process for three to five years, and sometimes even eight years.”

Zheng is so particular about the production process that he blocked a proposal by the factory where he worked to add a ceiling to the workshop where the fermentation pots are stored. Zheng was concerned this would change the flavor of Pixian Douban, so he experimented at home and concluded that the traditional procedures of sun-drying and dewing in a natural environment were crucial to establishing its flavor.

With its inclusion in the EU-China agreement protecting geographical indications, more people will come to know of Pixian Douban, the “Soul of Sichuan Cuisine.”

Enjoyed this story on China's food treasures? Be sure to check out our ongoing series on China's geographical indications here.