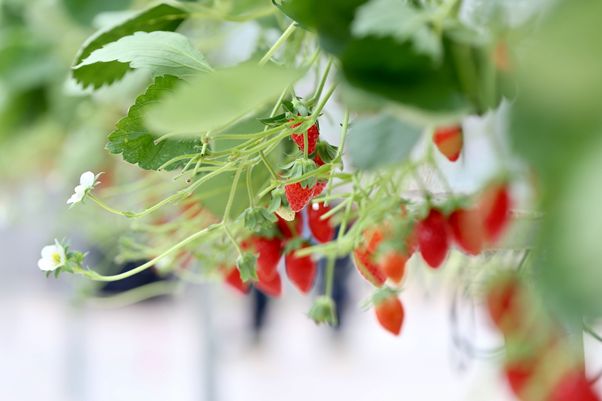 In May 2020, with technical support from the UN FAO, China Agricultural University and Chinese e-commerce platform Pinduoduo hosted a "smart agriculture competition". Three teams of top strawberry growers – the Traditional teams – and four teams of scientific AI experts – the Technology teams – took part in a strawberry-growing competition in the province of Yunnan, China, billed as an agricultural version of the historical match between a human Go player and Google’s DeepMind AI.

At the beginning, the Traditional teams were expected to draw best practices from their collective planting and agricultural experience. And they did – for a while. They led in efficient production for a few months before the Technology teams gradually caught up, employing internet-enabled devices (such as intelligent sensors), data analysis and fully digital greenhouse automation.

The final winner was announced in December 2020. The four Technology teams produced an average of 6.86 kg of strawberries, or 196% more than the 2.32 kg average for the three teams of traditional growers. Furthermore, the technologists also outperformed farmers in terms of return on investment by an average of 75.5%, according to the competition organisers.

So, what's the secret to technology that can beat humans at growing strawberries? The answer seems to be more precise analysis and application of data. The Technology teams employed knowledge-graph technology to collect historical cultivation data and strawberry image recognition. This was then combined with water, fertilizer and greenhouse climate models to create an intelligent decision strategy. As such, they were more precise at controlling the use of water and nutrients, and they also controlled temperature and humidity better through greenhouse automation.

By contrast, the traditional farmers tackled the same tasks by hand and experience.

This human-versus-machine strawberry contest illustrates that the traditional farming industry has tremendous room for a digital transformation – the Fourth Industrial Revolution (4IR) for agriculture. With nearly 10 billion people predicted to be living on Earth by 2050, about 3 billion more mouths to feed than there were in 2010, the need to make progress is becoming urgent. The challenge is highlighted by the coronavirus pandemic, which put the global food system through severe stress, disrupting regular supply chains.

In China, the agricultural industry is characterized by small farms and low digitization, making it difficult to achieve standardization and economies of scale. Furthermore, the industry also faces the problem of an ageing and dwindling farming workforce. That explains Chinese government’s plans to pilot a “digital village” at the beginning of 2020.

During the mobile internet boom of the last decade, Chinese farmers have been quick to adopt a digital lifestyle, using mobile payments and online video entertainment. In some areas, the extent to which villagers are connected to the internet is greater than in large cities. Now, the application of cutting-edge digital technologies to agriculture is the new frontier.

In addition to AI and big data, blockchain is another popular tech for smart farming in China – especially relating to the safety of food. Chinese consumers have encountered watermelons that exploded from the misuse of a growth accelerator chemical; “lamb” made of rat meat; and cooking oil recycled from waste oil collected from restaurant fryers, grease traps or even sewer drains (known as the “gutter oil”). Blockchain can be used to collect data about the origin, safety and authenticity of food, and provide real-time traceability throughout the supply chain.

For example, GoGo Chicken, a poultry monitoring technology based on blockchain, was developed by a subsidiary of the Chinese online insurer ZhongAn to chronicle chickens’ provenance to prove whether they are organic (or not). According to the company, each chicken wears a tracking device on its foot, which automatically uploads its real-time progress through the supply chain to the blockchain database. Sensors monitor temperature, humidity and other aspects of the chickens’ environment, while algorithms evaluate the bird’s health using video analysis.

Most recently, during the 2020 coronavirus pandemic, small and medium-size Chinese companies (or SMEs) – including many with little or no previous online presence – have flocked to video streaming to boost sales at a time when consumer habits are changing faster than ever. Interestingly, selling local products via live-streaming on e-commerce channels is gaining strong momentum in rural markets. This is partly because new media platforms have an abundance of easy-to-use video tools, meaning farmers can conveniently add videos to their marketing.

Digital villages for the global village

As agriculture digitizes, more new pockets of value will likely be unlocked from the oldest industry. We must continue to bring more digital tools, such as AI, big data, blockchain and IoT, to entrepreneurs working in farming, especially considering the irreversible trend of fewer and fewer people engaged in this work.

Much of this cannot happen until rural areas are equipped with a high-speed broadband network, but there are still about 3 billion people worldwide – mostly in rural areas – without basic internet connectivity. Furthermore, even in areas that already have internet connectivity, farmers have been slow to deploy digital tools because their impact has not been sufficiently proven. That’s why the strawberry competition is so important.

Digitizing agriculture will require huge government commitments. In rural China, future internet penetration will involve substantial investments in the network infrastructure in remote areas, for which the “digital village” initiative provides the financial and organizational support.

“Digital villages” are the future of agriculture of China – and the world. The pilot version will be a valuable reference point for how other countries can close the digital gap in rural areas.

While governments across the continents focus on the digital transformation of their rural economy, farmers themselves are busy generating new productivity that is much needed by the pandemic-stricken global economy.

This article was republished with permission from the World Economic Forum. The original article can be found here.