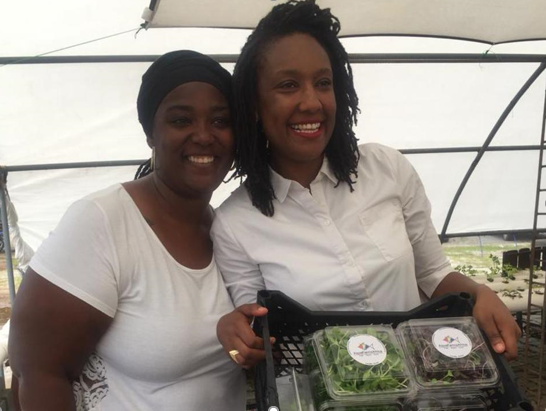 ‍AquaFarms Africa, an agritech startup based in Conakry, Guinea, is employing the technique known as aquaponics, which is a combination of fish farming and soilless vegetable growing. In this ecosystem, the fish excrete waste that is converted by beneficial bacteria to nutrients for the plants, which purify the water in return.

“The focus of AquaFarms Africa was to locally produce fruits and vegetables that normally are imported, because they're not able to be produced in Guinea,” Wiatta Thomas, co-founder of the company, said on an episode of the Agri Matters podcast. The produce would be sold to high-end restaurants and hotels that offer higher margins.

There is large scope for technology and inclusive sourcing to help connect poor farmers to better production techniques and more lucrative markets — bringing them into the value chain more effectively, the Word Bank said in a report.

Thomas and another co-founder of the startup, Bequita Mahama, chose aquaponics because it can produce plants that would not normally grow in a tropical climate.

Need a little refresher on what we do over at AquaFarms Africa? Watch our fearless leader Wiatta explain how Africa doesn’t own its food and the role AFA plays in achieving food security. Drop a 🌱 to say hi! pic.twitter.com/F7sSjpRRMj

Aquaponics is also generally considered to be more efficient than conventional farming as it is more productive on a per square meter basis and requires 95% less water than traditional agriculture. It is also completely organic.

Thomas has lived in Guinea for the last 9 years and worked across West Africa in youth economic development, giving her a deep understanding of entrepreneurial ecosystems and promising agricultural value chains. She has also built a business incubator called Dare-to-Innovate, and is actively engaged in promoting economic development and African diaspora investment in the continent, with agriculture being a priority sector.

“When I started my work, around 75% of the youth population was unemployed,” said Thomas. “Young people who are the biggest portion of the population and the most unemployed have to be equipped to launch businesses that can actually grow and create jobs for their peers.”

The company offers a tech-enabled franchise model to young entrepreneurs, allowing franchisees to focus on production while AquaFarms manages other areas of the operational value chain such as procurement, quality control, marketing, sales and logistics. Its proprietary app allows franchisees to better manage their sites.

“Everything that's needed to reduce costs, we're able to share them across the board amongst the franchisees, so that we can increase profits and reduce costs,” said Thomas.

Given the difficulty for young entrepreneurs to get loans in Guinea, Aquafarms designed a loan system in which part of the funds are from diaspora investors. The company offers loans to franchisees at an interest rate of about 6% to 7% annually, compared to the normal rate of over 30% from local banks.

Aquafarms’ next step is to expand in West Africa, starting from Ghana in 2022.

“This will really be a year of further tweaking and optimizing the entire system, so that we can really start scaling in 2022,” said Thomas. “And we have a pretty aggressive scaling plan from 2022 to 2025.”