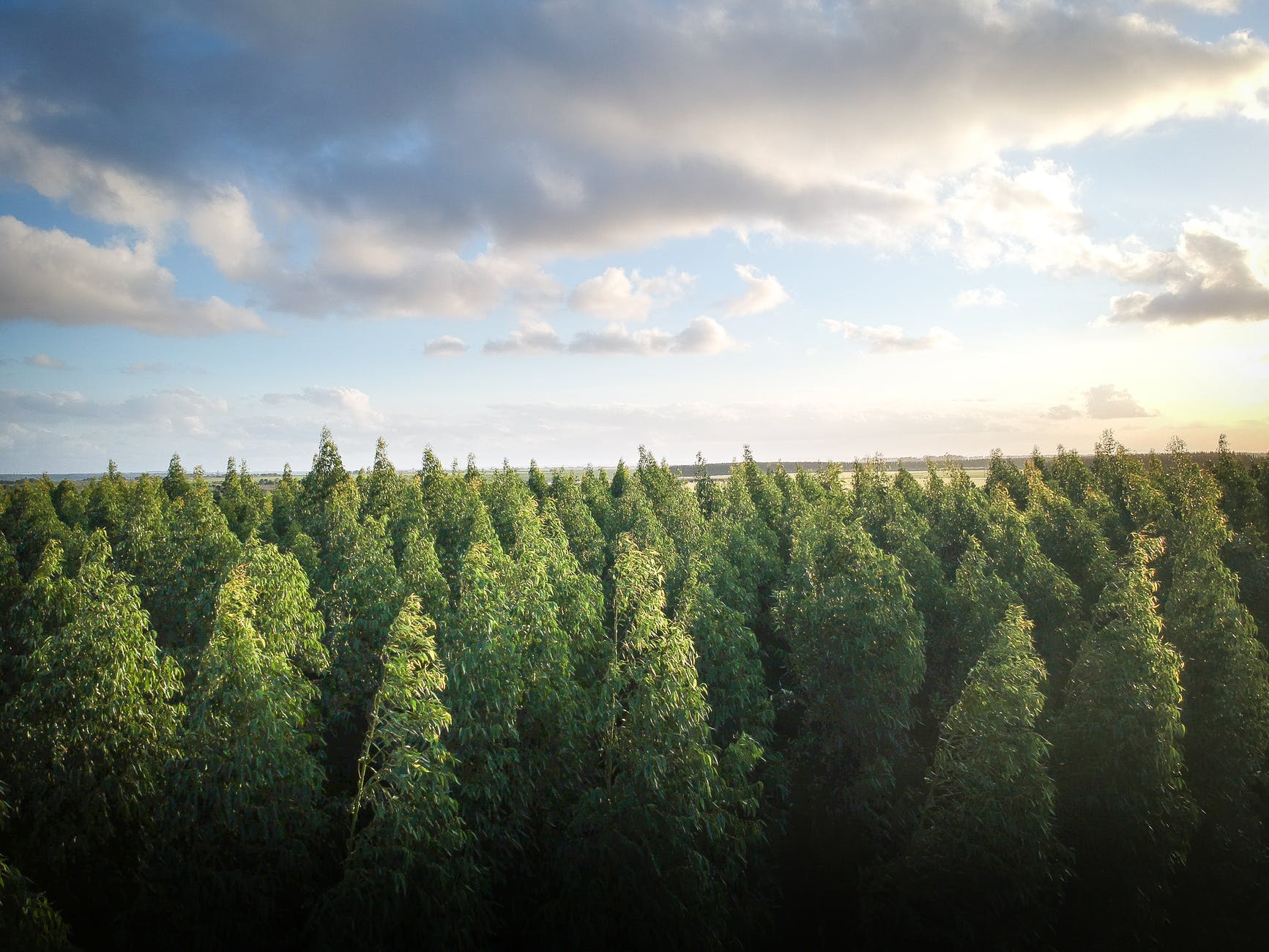 Forests are home to most of the terrestrial biodiversity on Earth. They supply food, water, resources, livelihoods, and mitigate climate change all at once. 31% of the global land area is covered in forest, but this number is falling fast.

Deforestation is a real threat that continues at alarming rates today. Between 2015 and 2020, it is estimated 10 million hectares of forest were lost per year, according to the UN Food and Agriculture Organization (FAO).

Agricultural activities continue to be one of the biggest drivers of deforestation worldwide. However, these two land uses can co-exist. They don't have to be mutually exclusive. What if the natural order of the forest ecosystems could be harnessed to create new forests that are also agriculturally productive? That is where syntropic agriculture or farming comes in.

Syntropic agriculture or farming is a type of regenerative agriculture developed by Ernst Götsch that focuses specifically on reforesting the planet. It imitates natural regeneration processes of forests, enabling people to create dynamic, successional, and economically viable ecosystems that restore degraded soil biodiversity, while also integrating them with productive agricultural food sources.

It is useful to think about it in the context where it is most relevant - for example, Brazil. This is a country that has experienced massive issues of deforestation over the last few decades, so there needs to be a strong incentive to reforest local areas. One simple way to do this is to introduce syntropic agriculture - this is a win-win as farmers will create an ecosystem that is viable at all stages of succession - short-, medium- and long-term - while also reforesting the region.

Farming in this way requires a deep understanding of the complex natural systems at play in local ecosystems, in order to best imitate them. As there are a whole host of factors that determine how a forest starts and progresses, syntropic agriculture is not a copy-paste strategy one can apply uniformly around the world.

Forests in Brazil, Northern India, Thailand, the Pacific Northwest, and Austria will all be home to different species of plants and animals, have different soil types, rainfall, temperatures, and human demands on their resources. Therefore the approach in each place requires specialist knowledge of the natural harmony of the ecosystem to apply the most effective syntropic agriculture techniques.

Syntropic agriculture provides a harmonious integration of food production and forest regeneration. It is an example of process-based agriculture, as opposed to input-based agriculture, which is how most conventional, large-scale farms operate. Essentially, it means you're working with nature instead of against it.

In recent years, this practice has been growing rapidly in popularity among permaculturists, activists, hobbyists, and both large- and small-scale farmers.

These are a few of the guiding principles of syntropic farming, and why they're important to the system.

Syntropic farmers have a clear goal of having all fertility and biomass grown directly within the system. Keeping the soil covered - either with cover crops, fallen leaves, offcuts from pruning, or something else - is key to maintaining fertile soil.

The timing of pruning is critical to ensuring the forest system continues propagating at a relatively speedy rate and doesn't start succumbing to senescence - a process which leads to a slowing of the system.

Pruning in conjunction with the plant's life cycle is key to preventing senescence. Usually this means pruning when plants begin flowering. For annuals, this signals the beginning of death, and for perennials, it triggers different growth patterns.

Both types of plants can benefit from pruning at this stage, as pruning causes a chemical communication to be relayed to the food web in the soil that accelerates the succession of a system. After pruning, tree roots release a growth hormone that triggers neighboring trees to grow.

Just because the system is not input-driven the way conventional farms are, it does not mean it is a low-maintenance system. There is still a great need for highly-skilled and intensive labor, especially when it comes to pruning and harvesting, due to the sheer density of plants, and the reliance of the system on pruning for accelerated growth - particularly in the early stages of ecosystem development.

Having control over the planting and forest "design" gives it an advantage its "natural" counterparts don't have - all plants can be planted facing south (or north in the southern hemisphere) to optimise for maximum sunlight hours. This leads to faster growth all round in the system.

The syntropic system is designed to reset, or synchronise, after the long-term crop is harvested. Following a 20 - 30 year cycle, trees can be cut down and harvested for timber for example, clearing the way for new niches to grow and develop. This mimics the natural forest process, as trees regularly fall to make room for new growth. In this way, the system becomes self-sustaining.

What Are the Characteristics of Syntropic Agriculture?

Syntropic agriculture shares a lot in common with other multi-story agroforestry practices. However, there are some characteristics that make it stand out on its own, or are shared with other systems but are presented in a unique manner within syntropic systems.

Plant everything at once

Ideally, all plants will be put in the ground at the same time. This of course requires a high intensity of management, as harvesting and pruning seasons will come in full force all at once every year.

In an 80 square meter plot, you can plant over 1100 trees/seeds/cuttings, and even this could have been doubled. The recommended guideline of 20 - 40 plants per square meter is extreme by pretty much every farming standard. However, the exception where slightly lower planting densities are seen are larger scale operations where the margin cost of such maintenance is not worth it.

There is a heavy emphasis and preference in the practice of syntropic farming to plan tree rows north to south (in the northern hemisphere) in order to maximise exposure to sunlight and therefore maximise photosynthesis, too.

If you've ever seen olive trees growing in the Greek countryside, or visited a vineyard, you'll know perennial crops are usually planted along contour lines, giving the field a clearly-defined terraced appearance from a distance. However, in syntropic farming, it is actually recommended to plant tree rows up and down the slope instead.

Syntropic practitioners prefer planting seeds directly into the ground rather than raising seedlings in little pots indoors and then transplanting them the way some gardeners might. The reasoning behind this is two-fold - it is seen as a cost-saving measure, and as a way to plant vast quantities of species fast.

When managing a syntropic system, one of the distinct goals that sets it apart from other regenerative agriculture practices is to replace all weeding with pruning and the organisation of biomass.

Due to the long-term nature of syntropic farm management, the pruning can get a little out of hand. It is not unusual for syntropic farmers to limber up tall trees and topping them at five meters. Usually this is done with a chainsaw while off the ground, or with specialist machinery. This is obviously a dangerous undertaking that requires a specific skill set and grit for the job.

Sourcing seeds, storing, planting, harvesting, and pruning such a high density system that is planted at once will of course require lots and lots of manpower - the likes of which aren't really seen in other farming practices. Syntropic farming requires unique skill sets and resources.

An intensive organisation of biomass

Syntropic systems dedicate a huge amount of energy - both human and fossil fuel - to processing biomass in specific ways that are unique to these systems. A common practice on syntropic farms seems to be to split banana trunks in half, and bucking and splitting logs into firewood sized pieces that can be used to line a path. Of course this is just one example of how biomass can be used, but this specific example is very common.

The main inputs in a syntropic system are knowledge, plant material, and labor. The farmer is tasked with managing several different species, through complex temporal and spatial patterns, in a way that is deeply compatible with the surrounding natural ecosystems. In return, the system provides outputs in as little as 30 days - such as radishes - and continues to do so unrelentingly even 30 years later, for example with timber.

Syntropic For the Future

In summary, syntropic farming has the potential to reforest several regions of the world that have been devastated by deforestation in recent years, while also providing a stable income to local farmers and access to healthy, delicious, fresh, sustainably-produced food for the local community. It is not a one-size-fits-all practice, and requires a great deal of intimate knowledge of the local ecosystems, but for those willing to go into it, the rewards can be massive and very long-lasting.