What is Agritech? Agricultural Technology in a Nutshell

What is Agritech? Agricultural Technology in a Nutshell 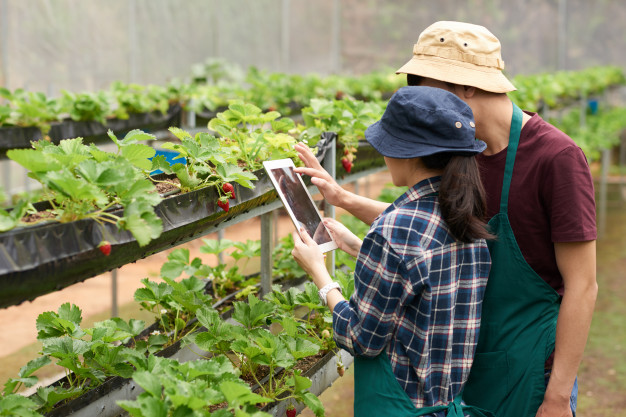 Agritech is the use of technology and technological innovation to improve the efficiency and output of agricultural processes. In other words, it is the application of technology to improve all elements of the farming and growing processes.

Applications of agritech are far-ranging and encompass several different types of agricultural and technological innovations. However, the aim of all these agritech technologies is the same - an attempt to grow more food in less space and/or with fewer inputs.

Agritech also saves farmers time and money, by automating tasks and replacing much of the labor needed on a farming operation - which usually constitutes the highest cost input to a farming system.

Here we explore some key industry-disrupting agritech examples and their applications.

Though not yet a very popular practice in the Western world, insect farming is a very sustainable agricultural practice. Not only does it require significantly fewer inputs than traditional animal agriculture - such as water, land, and feed - but it also yields a very high-quality protein that can be used for human or animal consumption.

Rearing insects such as crickets is becoming increasingly popular for this very reason. Crickets can be eaten roasted, as a snack, or ground into a flour, to be used in baked goods.

Black soldier fly farming is another popular method of insect farming, though its applications vary slightly. Black soldier fly larvae are incredible decomposers, meaning they can literally feed on nothing but organic waste. They don't create any of their own waste in the process, and are themselves used as livestock feed. In effect, farmers can transform food waste into livestock feed by harnessing these critters to create a closed loop cycle.

Urban farming is the practice of growing food in urban areas such as cities, building rooftops, or underground, for the purposes of commerce. Urban farming can take on many forms, but two of the most popular include urban and vertical farming.

Depending on the method used, urban agriculture has many advantages over traditional agriculture. Firstly, it can help communities achieve advancements in health by providing easy access to affordable, locally grown food, which is higher in nutrients than food with a large time lag between harvest and consumption.

Secondly, some urban farms are built with the sole purpose of training a local community. This brings additional economic prosperity to the region in the form of new jobs and increased income.

The Latest in Farm Robotics and Mechanization in Agritech

Navigating the field and crops

GPS agriculture, also known as satellite farming, is the use of GPS technology to increase farm efficiency. There are many ways GPS technology is being used in agritech to boost yields while minimizing inputs. GPS agriculture enables the real-time mapping of fields and farmland, allowing farmers to gain valuable insight into the nuances of their land.

Self-driving tractors, or driverless tractors, are tractors that can be operated without a driver. Combining these automated agritech tractors with GPS technology has presented immense advancements in precision agriculture, agritech and farming as a whole. Farmers can essentially now program their tractors and leave them to drive themselves along a field, while they are free to focus on higher-value activities.

Farm management from above has also added a lot of value in a short amount of time to farmers across the world. Drones and other unmanned aerial vehicles (UAVs) have burst into the industry, and have a plethora of agritech applications that work to save farmers time and money, while boosting yields.

Drones can be mounted with cameras to capture images of farmland from above, or identify crops that seem to be suffering from disease through data technology. The technology in this innovation can also sweep across a field releasing herbicides or pesticides to fend off weeds and pests, or to plant seeds in neat rows without farmer intervention.

Agri robots are providing innovation and reshaping the farming industry in a big way. Aside from the obvious impact they have on reducing total farming cost of production by eliminating a great number of human labor hours from the equation, they have been benefiting a plethora of farm operation areas.

Notably, agritech robots are already in use on some farms. Depending on the agritech robot, their responsibilities could include herbicide spraying, shepherding, seeding, harvesting, and more. Usually their operation is much more precise and therefore cost efficient for farmers, using 90% less input in some cases.

Additionally, their marginal cost decreases over time. In other words, while they do require a considerable capital investment upfront, these robots pay themselves back over time. Even when maintenance is factored in, these agritech robots remain an incredibly viable option for farmers who have their sights set on an increasingly automated farming operation.

The advent of agritech systems and equipment has made farming smarter and more automated in the last few decades. Using agritech robots for planting and harvesting, agritech drones for irrigation and data, automated seeding and weeding, and tools for monitoring and analyzing farm activity and efficiency has allowed farmers to reduce the time they spend on manual labor and repetitive tasks.

With more of their time freed up, farmers can now focus their energies on higher-stakes activities like investigating business expansion, marketing, and distribution channels that will raise their bottom line.

In recent years, battery powered electric tractors have erupted onto the farming and agritech scene, serving as an alternative to diesel-powered tractors. While diesel tractors are undeniably efficient, they still rely on fossil fuels to run, making them a significant contributor to greenhouse gas emissions.

Electric tractors are poised to side-step this problem, while providing an equally reliable service to farmers who might opt to use them. Additionally, they are noiseless and cheaper to run than their diesel-fueled counterparts. However, they are not without their pitfalls, which include the need for charging stations and the time needed to recharge their batteries.

Producing enough food to sustain the global population would be significantly more challenging if we didn't have chemical fertilizers. However, these fertilizers are known for their negative impact on the environment - they are fuel-based, and are also a leading cause of salinization, as they increase the salinity of the soil if overused.

Fertigation is a farming practice popularized relatively recently. It combines traditional fertilization practices with traditional irrigation practices, to deliver a result that is equally as beneficial to crop yields, while minimizing the impact on the soil and wider environment. It relies on existing irrigation infrastructure to deliver nutritious compounds to the growing crops.

Precision agriculture is a relatively novel approach to farming that can boost a farmer's yields and efficiency of production, while minimizing their costs and their carbon footprint. Somewhat a rebellion against the principles of the Green Revolution, where more was more, precision agriculture aims to grow more with less.

The lightning-speed advancements in technology of the past couple of decades, coupled with a growing population and decreasing global acreage of arable land created the perfect storm for this kind of disruption in the agriculture industry. Agritech is being used to save farmers time, and money, while maintaining and even growing their profit margins.

Learning About Big Data in Agriculture

Data is power. This is no different in agriculture, where the role of big data in driving efficiencies has not been insignificant. Quite to the contrary, big data has enabled farmers to gain detailed insights into areas such as how different areas of their land behave through the seasons, the granular efficiency of their specific farming practices, and where environmental impact can be reduced, to name a few.

Modern systems have been applied to the agri tech field, leading to the development of equipment such as AI farming tools, IoT agriculture, and agri sensors. These systems use artificial intelligence, advanced statistics, and database analysis to give farmers digestible segments and visualisations of vast amounts of data which previously would have been incomprehensible and simply too much to decipher.

The Future of Innovative Food

The hunt for alternative protein sources

The global demand for protein is an interesting dichotomy. While rising standards of living and income per household are rising in the developing world, so is the demand for animal products, as they are still seen as a sign of luxury in some parts of the world.

Conversely, the demand for vegetarian and vegan foods in the developed world have never been higher. As more light is shed on the devastating environmental consequences of livestock farming, and populations are becoming more health-conscious in an effort to combat non-communicable, lifestyle-related diseases such as cancer, diabetes, hypertension, and others, the demand for alternative protein sources is rising exponentially in the developed countries.

Alternative meat proteins, such as plant-based "meat" which is high in protein, and meat grown in labs from actual animal cell cultures have both placed themselves as strong contenders on the market. Another alternative source of protein which hasn't yet taken off in quite a fashion but is showing great potential are insect proteins. These two innovative food choices could go a long way in satisfying our desire and need for healthy protein sources, without costing the Earth.