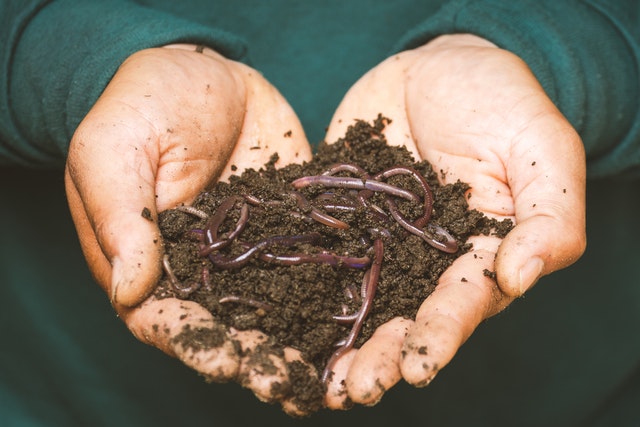 Vermicomposting is the process in which food waste is turned into fertilizer with the help of earthworms. The worms eat vegetable and fruit scraps, then churn out pure worm castings, which are then harvested and used to fertilize soil for plant growth and crop cultivation.

Also known as worm composting, vermicomposting is the most basic and natural way of treating organic materials such as vegetable and fruit peels to tea bags and even shredded paper. Harvesting worm castings from the finished compost can also be sold to urban gardeners, or used in place of chemical and artificial fertilizers.

Vermicomposting does not only pertain to the composting worms, but to the entire ecosystem as a whole. The concept starts from the organic materials, which passes through the worms, and ends up as fertilizer that goes back into the earth. The cycle continues when plants grown with worm manure become fruit and vegetable scraps ready for composting.

Since vermicomposting requires very little space and materials, composters in both rural and farmland areas often look to worm composting to process their food waste, and create natural, organic fertilizer for their gardens or crops.

Worm bins are built in different layers to provide a separation between worms, food scraps, and to make harvesting the vermicast easier. As vermicomposters supply the worm composter with food, the vermin break down and eat up the waste, turning them into beneficial resources.

There is a liquid fertilizer, called worm tea, that seeps out of the compost bin together with excess liquid. Many farmers prefer harvesting the liquid fertilizer, as it can readily be used to provide a boost in the growth of plants and crops. Others, however, prefer the slow-release fertilization of the dry vermicast.

Vermicomposting worms are a proven method that effectively treats organic waste, and worm bins are sustainable, eco-friendly, and easy to start even in small spaces. Worms multiply quickly, and are also low maintenance, making them ideal for processing organic waste.

Creating a worm bin does not only cut household waste by up to 30%, it also decreases emissions brought about by processing waste in commercial treatment plants. A worm bin only needs a few household items to set up, and any large container can potentially be used as a worm bin.

You also divert the trash that goes into landfills, and create resources that sustain the environment. Vermicomposting makes for a learning experience for kids, as they learn how the earth deals with organic material wastes, and how worm feces extracted from this process go back into the earth to provide plant nutrients.

How to Create an Indoor Worm Compost Bin

Indian blue worms (Perionyx excavatus), on the other hand, fare well in tropical climates as this species thrives in humidity and warmth. African nightcrawlers (Eudrilus eugeniae) mature quickly in warm weather, and are the preferred species for composting fibrous and starchy materials.

Mixing of worm species is possible, but not recommended as one species will eventually dominate and wipe out the other. When combining species, it is best to choose two that have similar preferences in moisture and temperature levels, but have different preferences in food sources to prevent competition.

Commercial bins and vermicomposting sets are available in the market to start worm composting, but any large plastic bins big enough to house a moderate number of worms can be used as a DIY setup. Keep in mind that the worm population will continue to grow as long as a healthy environment is provided to them.

If using DIY bins, make sure there are enough ventilation holes for proper airflow to circulate around the worm composting bin. Some vermicomposters place wire or gauze patches over large holes to keep worms from escaping.

Place a layer of damp shredded paper or newspaper at the bottom of the bin as worm bedding materials. Sprinkle garden or potting soil around the dampened paper, then fill the vermicompost bin with worms. Stay away from peat moss in the worm bed as it is acidic and may cause common worm bin problems.

When feeding worms, refrain from checking on the vermin frequently, as worms prefer the dark and retreat beneath the surface upon the presence of light. The compost bin should not be out in the sun, but in a shaded area to prevent the worms from overheating.

Collect food scraps, like vegetable peels or fruit peels, and moistened paper products, and place them in a circular pile on the surface of your compost bin. Worms do not consume dairy products, or oils so best to avoid these as they may introduce harmful bacteria into the ecosystem.

Do not feed until the previous feeding has been completely devoured. Lightly spray some water to provide the worms with moisture if the soil looks dry, but the worms should be content with the moisture from the food waste.

Additionally, diversify the feed. Worms get nutrients from the food they eat, so maintaining a healthy population of worms will require a variety of food to keep the worms healthy. Mix up the kitchen scraps, and provide them with some essential nutrients from time to time to grow your population.

Finally, harvesting the vermicast either for selling or for garden use is fairly simple. Once the compost has noticeably turned into a dark brown or black shade, then it is ready to harvest. Simply separate all the worms and uneaten food from the vermicast, and replace any lost shredded paper and soil in the compost pile.

The vermicast, full of beneficial microbes, can now be used as fertilizer, sold in packs to farmers and gardeners, or steeped in water to create a liquid version of the vermicast. The organic matter is great for almost all types of plants, and crops yield larger and more fruit when supplied with vermicast.

Nature works in amazing ways even without human intervention. From the start of life to the processing of organic wastes, nature has it covered. Vermicomposting is living proof that natural ecosystems can become self-sustaining when given the chance, and that there are better, eco-friendly ways to process waste products.