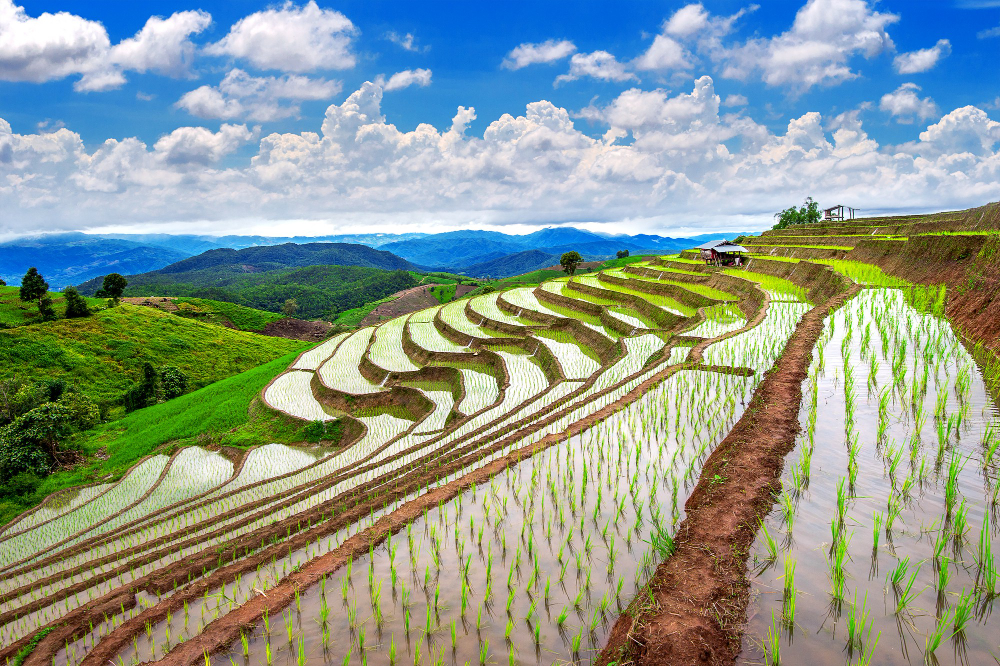 Terrace farming is commonly used in rice cultivation around the world, especially in areas with hill and mountain ranges that are otherwise arduous to use for conventional farming. Terrace cultivation utilizes moist, idle land for growing crops, and has provided ancient civilizations with high food security for millennia.

The practice has long been an integral part of agriculture, going as far back as ancient civilizations. The farming method also continues to carry cultural significance, with ancient terraces being preserved as global heritage sites for many decades now.

What is Terrace Farming?

Terrace farming is an agricultural practice where steep slopes are divided into receding levels or 'steps' called terraces. These plantations were built to provide people access to food, using natural rains and soil structures to sustain crop growth throughout the planting season.

Terrace farming is believed to have been started by the Inca people in the region of South America between 1400-1500 CE. However, there is evidence that the Wari culture of Andes first cultivated crops in terraced farms before 1000AD, and these farms were known as andénes. The farming technique served as a way to cultivate crops on hilly terrains and high altitude locations.

How Does Terrace Farming Work?

Terraced fields are traditionally built on pre-existing slopes, covering the area with flattened steps used in rainwater harvesting to grow crops, and provide ample soil moisture. The flat areas give way to soil conservation, allowing the nutrients in the soil to stay on the steps instead of running down the hills.

As rain water flows down the terrace fields, water-retaining walls act as a catch basin, preventing moisture and soil nutrients from trickling down the slopes. Crops such as maize, barley, and rice are among the crops planted in terrace fields, and terrace cultivation is most prevalent in parts of Asia, mostly in rice-growing countries and hilly terrains.

Level terraces are formed to have catch basins for water, and are ideal for crops that are water-dependent as the water collected from rain serves as irrigation systems for the crops. Level terraced fields are commonly used in rice cultivation in hilly lands which have permeable soil.

Examples of Terraced Fields Around the World

The Banaue Rice Terraces in the Philippine's Cordilleras region is a UNESCO World Heritage Site, known for its intricate structures that were hand-carved by the Ifugao people. Each rice terrace took years to build, and are said to have been supplying rice to the people who depend on these leveled bench terraces for over 2,000 years.

The Machu Picchu Terraces in Peru, South America form different sections of the community in addition to being terraced fields. Machu Picchu is a well-known ancient heritage site that explores how former inhabitants survived during the height of the Inca Empire. Each terrace was lined with stone walls, and had connections to various community areas..

Salinas de Maras, The Sacred Valley of the Incas

The Inca-built salt terraces have produced and provided salt to the region for nearly 3,000 years. Also known as the Maras Salt Mines, thousands of salt pans line the hillside and are shaped into polygons - essential in collecting the dissolved salt minerals from the nearby subterranean stream.

The Benefits of Terrace Farming

Terrace farming mainly benefits the people that rely on the farms for food and sustenance. For lands that have uphill structures and steep slopes, like those of the Canary Islands, terrace farming optimizes the land area where people can plant and cultivate crops.

Steep slopes often cause soil erosion, which degrades the quality of the soil and creates less fertile land. Terrace farming prevents soil erosion and surface runoff, working as barriers that retain soil moisture as well as soil nutrients. Instead of rain carrying away soil nutrients, the terraces form as catch basins that distribute nutrients to the field.

Terrace farming also allows people residing in uphill terrains to create productive farms for growing food and industrial crops. Soil at very high altitudes is often less fertile than the soil at the base of a mountain, and terrace farming created a way for people to maintain soil fertility to grow resources.

The Disadvantages of Terrace Farming

Terrace farming can be disadvantageous during the rainy and monsoon seasons, with soil getting oversaturated. The water overflow can cause runoffs, and can lead to landslides when not monitored well. Terrace farming is also labor intensive to build and maintain, as most formations were slowly built through multiple generations of workers.

Terrace farming is an extensive and expensive project compared to other forms of agriculture. Despite being preserved as cultural sites, many of these formations are not properly maintained, and are left to deteriorate. Around 30% of the Banaue Rice Terraces in the Philippines has been abandoned along with its irrigation systems that earned its UNESCO status.

Climate change has also made maintaining historical terraces much more difficult, as the seasonal changes often bring drought, floods, and other extreme weather conditions that may not have been common in the area previously.

Terrace farming does not serve to be a form of modern agriculture, but rather presents a glimpse into the evolution of agricultural architecture and crop cultivation. The man-made marvels are preserved as historical sites, but are still threatened by the ever-changing effects of climate change and environmental degradation known to mankind today.