Silkworm Farming: All You Need to Know About Sericulture

Silkworm Farming: All You Need to Know About Sericulture 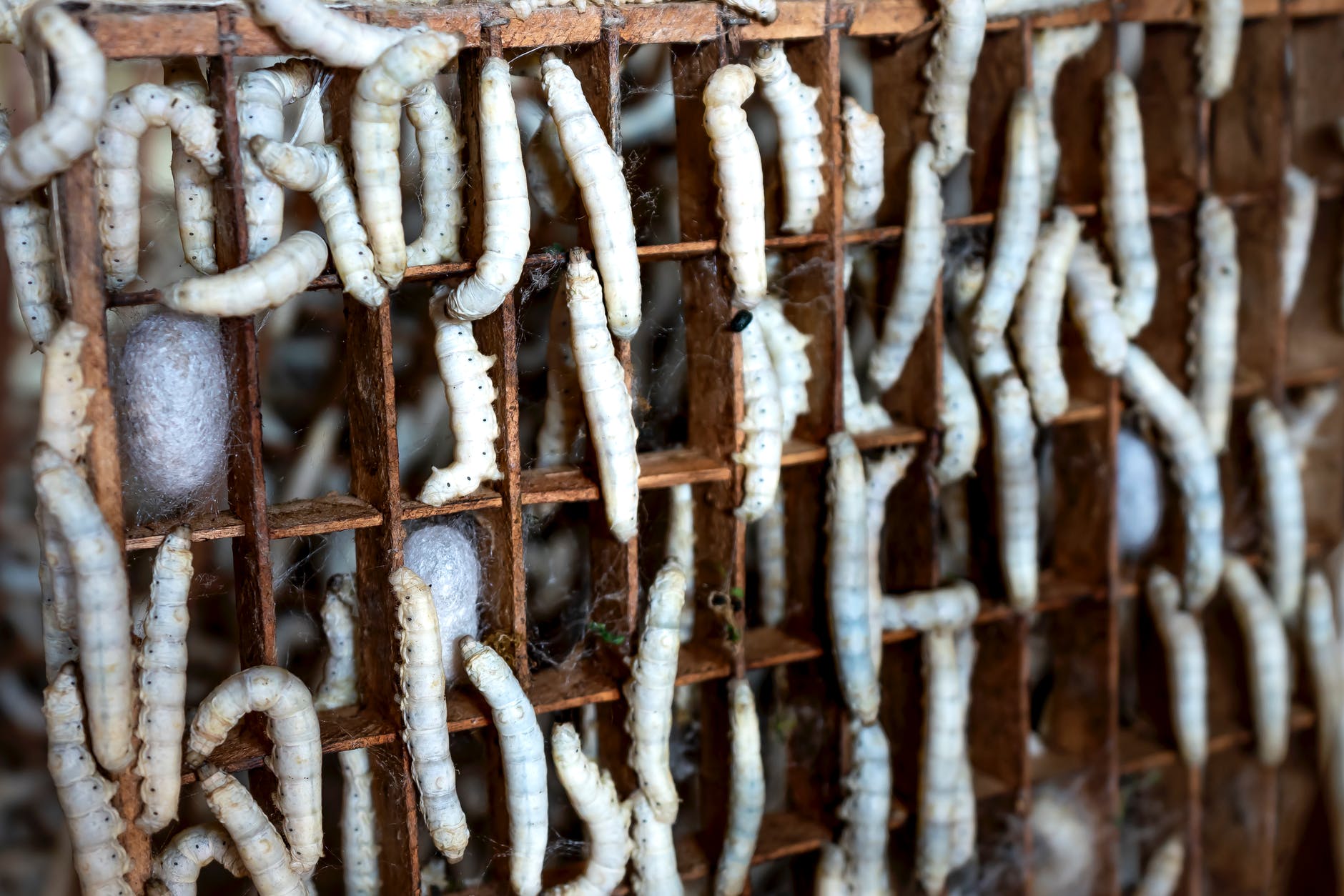 Silkworm farming - or sericulture - is a practice that has been around for over 5,000 years. Silkworms are an economically significant insect, as they are the primary producers of silk. While silk only makes up 0.2% of the global textile market, they are lucrative pursuits. 90% of all silkworm farms and silk production occur in Asia - specifically China and India. The remaining 10% of global silk production comes from Brazil, Uzbekistan, Vietnam, North Korea, and Thailand.

What is Silkworm Farming?

Silkworm farming is the process of breeding, rearing, and harvesting silkworms for the purposes of silk production. Most of the global silk supply comes from a single one-inch caterpillar, or larva, of the domestic silk moth, also known as Bombyx mori.

They were domesticated around 5,000 years ago and are entirely reliant on humans for their survival. Their favorite food is the white mulberry leaves, which gives mulberry silk its name. There is also non-mulberry silk, but this makes up a small minority of world silk production.

Though industrially, sericulture has never managed to take off in the West the way it has in Asia - primarily due to higher labor and resource costs and lack of thousands of years of cultural knowledge about the process - sericulture is a great hobby for a homesteader or those interested in learning more about these insects, as the whole silkworm farm can fit in your backyard.

The Different Types of Silkworm

The univoltine breed is generally associated with the geographical area of greater Europe. They produce silk only once a year. The egg hibernates in the winter due to the cold European climate, and cross-fertilize by the spring.

The bivoltine breed of silkworm is associated with East Asia - specifically China, Japan and Korea. These silkworms breed and produce silk twice a year. This is made possible by the slightly warmer winter climates present in East Asia, which results in two life cycles instead of just one as experienced by their European counterparts.

The polyvoltine mulberry silkworm is only found in the tropics, where the winter weather is the warmest in the world. These eggs hatch 9 to 12 days after being laid. The result is that this breed of silkworm can have several life cycles throughout the year, sometimes even as many as eight. This makes them the most productive type of silk producers.

Breeding silkworms is a practice that has been going on in China for approximately 5,000 years. Since then, the productivity of silkworms has increased nearly ten-fold. The primary reason for this is that silkworms have been genetically selected for maximum silk output and almost little else.

The goal of silkworm breeding is to improve the commercial viability of silkworm farming or sericulture and, by proxy, silk production. More specifically, the primary objective has been to improve fecundity - also known as egg-laying capacity. Other objectives include improving larval health, resilience against disease, and the quantity of cocoon and silk harvest.

Healthy larvae produce healthy cocoons. Factors that influence larval health include a higher pupation rate, and fewer dead larvae in the colony. Additionally, a shorter larval duration lessens the chance of infection, so reducing this time period is also a good thing to aim for.

The quantity of cocoon and silk produced are directly correlated with the pupation rate and the larval weight. Healthier larvae have higher pupation rates, which leads to larger cocoon weights, which in turn means a greater silk harvest. The quality of the silk produced is also influenced by genetic factors.

Silkworm cocoons are made of several threads of raw silk spun together. Unspun and laid out end to end, the thread making up a cocoon can be anywhere from 300 to 900 meters (1,000 to 3,000 feet) long.

The silk itself is made of two elements - fiber and sericin. The fiber is very fine, only about 0.0004 inches in diameter. It comprises the majority of the silk, anywhere between 75% - 90%. The remainder of the thread is made up of sericin, the gum produced by the silkworm which glues the fibres together into a cocoon. This represents 10% - 25% of silk. It takes about 2,000 to 3,000 cocoons to make a pound of silk (0.4kg).

When it comes to producing this silk, there are seven key stages to the sericulture process.

The first stage of silk production is egg laying and hatching. Typically, this will occur in a controlled environment like an aluminium box.

The female silk moth will deposit anywhere from 300 to 400 eggs at any one laying, each about the size of a pinhead. The female moth dies almost immediately after laying these eggs, and the male moths don't live much longer afterward either. It is evolution playing a game of cold efficiency, if you choose to see it that way.

They incubate their eggs for a short while - usually no longer than just 10 days - before they hatch into larvae, or caterpillars. At this point, the larvae are only about 0.25 inches long.

Once the precious larvae have hatched, the immediate priority is to ensure they are getting the right food, and enough of it. The newly born larvae are placed under a thin layer of gauze and fed immense amounts of chopped mulberry leaves. Depending on the type of silkworm you have, these can be the leaves of the white, red, or black mulberry tree.

During this feeding frenzy, the larvae will shed their skin four times. They eat copious amounts of the mulberry leaves - the best feed if you're after producing the highest-quality silk - usually averaging around 50,000 times their initial weight in plant material!

This stage of production continues for four to six weeks, during which time the larvae are gorging almost non-stop.

There comes a point about 6 weeks after hatching that larvae will begin to molt. This can be distinguished by the fact that at this point, their heads turn darker.

This causes their bodies to become slightly yellow in color, and their skin becomes tighter. At the mature part of this stage, the silkworms measure about 3 inches in length, stop eating, and weigh 10,000 times more than they did when they were born.

At this point in their lifecycle, the instar starts weaving its cocoon. In order to do this in nature, the silkworm attaches itself to a twig or a shrub. However in a silkworm farm, compartmented frames are used, with each division being occupied by a single silkworm building a single cocoon. The construction period, also known as pupation, takes anywhere from 3 to 8 days, during which the silk cocoon is spun.

Silkworms have a pair of modified salivary glands known as sericteries. They are used to make fibroin, a clear, thick fluid rich in protein, which is pushed through openings adjacent to their mouth-parts called spinnerets.

The thickness of the silk thread is determined by the diameter of the spinneret itself. The thread is produced as a long, continuous string. Secretions harden upon exposure to air. The sericin mentioned earlier is secreted from another pair of glands which bonds the filaments together.

Over the pupation period, the silkworm spins its body in a figure-eight shape up to 300,000 times in order to construct its cocoon. Each cocoon equates to roughly a kilometer of raw silk.

After its incubation period in the cocoon, the surviving insects release enzymes which bore a hole through the cocoon, allowing the mature silk moth to escape. These enzymes are destructive to the silk, as instead of ending up with a continuous string of silk, you end up with various strands of varying lengths instead, making it much less commercially viable.

In order to prevent this from occurring, the silkworm cocoons are boiled. The heat from boiling kills the silkworms and the water simultaneously makes the cocoons easier to unravel. The silk is then unbound from the cocoon by softening the sericin gum holding it together. It is then carefully unwound, a process known as reeling the filaments.

The silk yarn is soaked in warm soapy water to remove the last of the sericin gum and give the silk its distinctive softness and shine. Degumming decreases the weight of the silk by up to 25%. At the end of the degumming process, you are left with a creamy white yarn that is soft and ready to be dyed.

There is a distinction in the silk industry between pure-dye and weighted silk. In the pure-dye process, the silk is colored with dye and then finished with any of the following water-soluble substances: glue, sugar, or gelatin.

By contrast, in the production of weighted silk, metallic elements are added to the fabric to increase the weight lost in degumming and to add body to the fabric.

Generally, pure-dye silk is considered to be of superior quality.

How to Establish a Silkworm Farm

We have covered the basic process of rearing silkworms for silk production. If you are thinking about establishing a silkworm farm, the key thing to consider is whether you will be able to access adequate and consistent supplies of mulberry leaves for the larval stages of production.

The second consideration to make is the environment in which these silkworms will be raised. There are several ways to make it work, but the most common way to raise silkworms is in trays where they will grow and feed. The key is to ensure the larvae remain in warm and dry conditions with good ventilation. 25 - 31°C (78 - 88° F) is the ideal temperature range for these insects.

When the silkworms are ready to start pupating, place a straw frame over each tray so they can start spinning their cocoons.

A fungus that destroys the entire silkworm body. This emerges when silkworms are raised in cold environments with high humidity.

This disease is caused by the polyhedrosis virus. It is observed in the very early stages of the life cycle, and is usually an indication of a virus caught during hatching, usually due to poor hygiene in the rearing house.

A very lethal disease which kills silkworms hatched from infected eggs. The pathogen that causes this illness comes from the silkworm food source, and can transcend the various life cycle stages of the insect. There are no visible symptoms, but 100% of eggs laid by an infected moth will die. Therefore the only hope is to check the moths' body fluid under a microscope.

Raising silkworms is not likely to be a commercially viable activity as there are powerful markets dominating the industry. However, sericulture can certainly provide an interesting pastime for hobbyists or homesteaders.