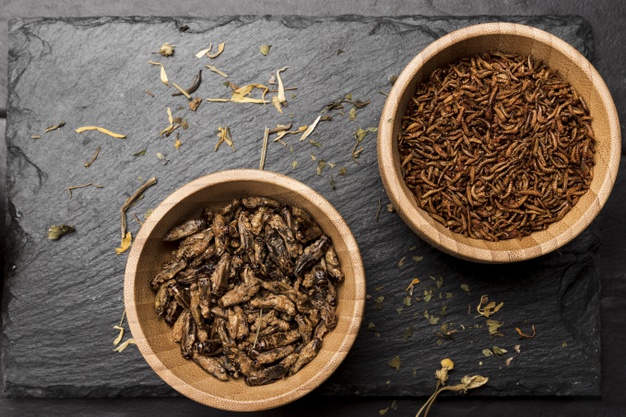 Edible insects could be a key component of future food systems. Studies have shown insect proteins to be a healthier and more sustainable alternative to animal proteins, with several insect-centric startups emerging over the last 5 years.

Despite these proven benefits, insect proteins remain uncommon in the western world. By contrast, several countries in Africa and Asia have seen insect farming skyrocket, with grilled crickets and fried termites becoming staple snacks in Thailand and Ghana. What is the future of insect proteins, and are they really a new sustainable food alternative?

Humans have been consuming insect proteins for thousands of years, since we were hunter gatherers.

There are records of Ancient Greeks and Romans eating a range of insects, including the locusts and beetle larvae. Aristotle even summarised the ideal time to harvest cicadas in his writings.

In the Bible's Old Testament, Christians and Jews alike were encouraged to eat insects, and in the New Testament, it is said St. John the Baptist survived on locusts and honey when he lived in the desert.

In the mid-1800s, the Native American Paiute tribe was known for charring Mormon crickets and turning them into a flour-like powder. Similarly, some historic meals of Aboriginal Australian tribes have been known to contain moths, honeypot ants, and witchetty grubs.

Today, about 1,900 varieties of insects are still consumed by approximately 80% of the world's population. The most popular insects worldwide are beetles and caterpillars, which make up 31% and 18% of all insects consumed, respectively. These are followed in popularity by wasps, grasshoppers, locusts, ants and crickets.

The consumption of insect proteins is most popular in Latin America, Asia, and Africa, comprising 60% of the diet of some rural African populations. For example, in the west-African country of Ghana, winged termites are collected and fried, roasted, or made into bread.

In southeast Asia alone, there are an estimated 150-200 species of edible insects, while in the Kinsasha, the capital city of the Democratic Republic of the Congo, approximately 300 grams of caterpillars are consumed per person per week.

Thailand, China, and Mexico are also known for their insect consumption habits. Crickets, grasshoppers, and several species of worms are considered snacks in Thailand. In China, beekeepers are considered virile due to their consumption of larvae from their beehives. Mexico is known for its candy-covered worms and chocolate-covered locusts.

Why Eat Edible Insects as a Food Alternative?

Despite their disrepute in the West, eating insects as an alternative protein source actually has a lot of benefits that could help create a more sustainable food system.

According to the UN, the livestock farming industry is responsible for 14.5% of all carbon emissions globally. The Amazon rainforest is being deforested at a rate of about 10,000km2 per year, of which 80% is attributed to cattle ranching.

Raising insects takes up a lot less space than cows or pigs, which in addition to enormous reductions in emissions, has the added benefit of allowing protein production to become hyper-localized. This reduces the need for long supply chains, and reduces the associated transportation emissions.

Insects are cold-blooded, meaning they don't need as much energy inputs to keep them warm, the way livestock do. Moreover, they require significantly less feed. For example, crickets require half as much feed as chickens, four times less feed than sheep, and twelve times less than cows for the same protein yield. This means costs to the farmer are significantly lower.

A lower financial barrier to entry makes insect farming an ideal business for rural populations of lower socio-economic standing, who perhaps don't have the opportunities to start a traditional farm. In 2017, several rural Kenyan women took up cricket farming as a way to generate a stable source of income for their families, turning the insects into flour and making baked goods.

Eating insects could provide several health benefits. They are a fantastic source of minerals, such as magnesium, zinc, and iron. Consuming just 2 silkmoth larvae contain 10-times more protein than 100g of beef.

Opportunities and Challenges in Insect Consumption

Despite its many benefits, the industry still faces challenges. The main obstacle is consumer perception of dislike, disgust, or fear of insects. Pioneers of insect proteins production will need to influence a major shift in public opinion if they are to break through to the masses in the developed world.

Notwithstanding, the global market value of the industry was valued at $406 million in 2018, and is predicted to balloon to $1.18 billion by 2023. Surprisingly perhaps, the North American market specifically is predicted to grow 28%, the most out of any other region.

A few startups have emerged centred on insect farming. US-based Exo, a cricket protein bar, raised a $4 million investment round. Along a similar vein, Entocycle in the UK has so far raised an $11 million series A to develop and scale their concept - feeding food waste to black soldier fly larvae, and using insect proteins as pet food, frass, or livestock feed.

Consuming insect proteins has been a way of life for thousands of years, and is still very popular in certain areas of the developing world. In recent years, edible insects have received increasing attention as a potential way to provide our growing global population with high-quality protein.

Boasting sustainability, economic, and health benefits, as well as a growing market value, the edible insect industry seems an avenue worth pursuing. However, entrepreneurs in this space have an uphill battle ahead of them to change consumer sentiment around insects. But if that can be achieved, insect proteins could well be on all our menus soon.