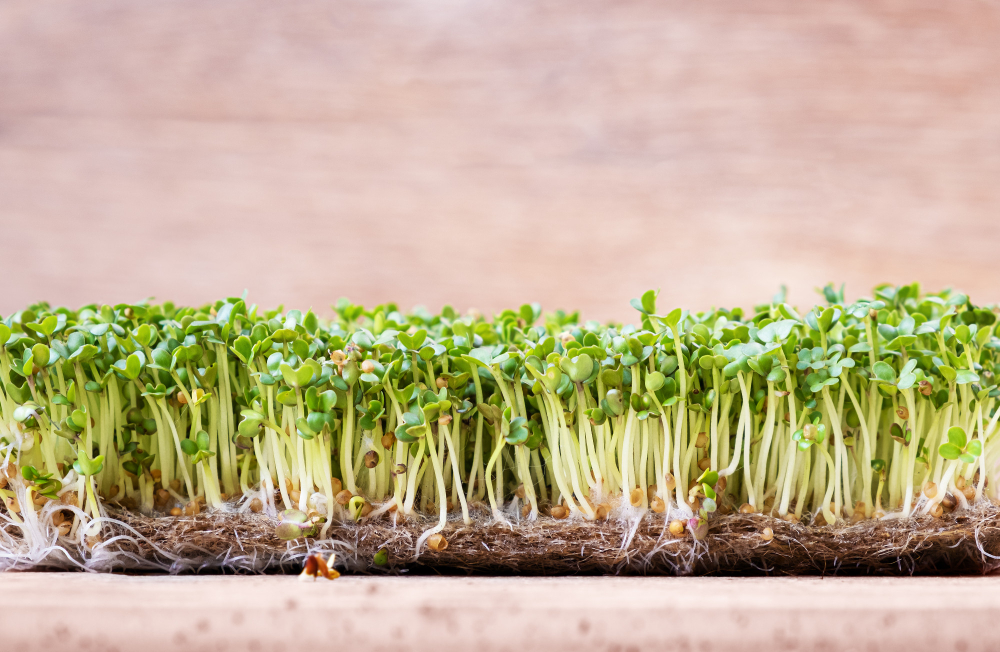 At the most basic level, growing hydroponics means replacing the soil plants traditionally grow in with water. Plants get all their nutrients from fertilizer solutions that are added to the water.

Additionally, hydroponics allows plants to be grown in a variety of places, including indoors, which means farmers can control every aspect of the environment to ensure the optimal conditions for the plants to grow. As a result, there are several benefits to farming this way, including increased yields, decreased inputs, and fewer diseases.

Growing hydroponic microgreens in this manner can bring numerous benefits to local communities. These nutrient-dense foods can sell for a premium, are in-demand by high-end restaurants, and are very easy and quick to grow.

Microgreens originated in California, where innovative chefs began to use them to impart color, flavour, texture, and interest to dishes. Today, microgreens are sold as a high-value product in supermarkets worldwide. They are primarily used as toppings, garnishes, and flavorings in salads, and feature prominently in many up-market restaurants and best-selling cooking books.

These microgreens are much smaller than a baby salad leaf in size, and will usually have only produced two leaves after the seedling leaves, or cotyledons, were expanded. A small crop of microgreens can be harvested very young, so they must be grown in high density to maximize yields.

A wide range of plants are now grown as microgreens, and their needs go beyond just flavor or looks. For example, the health food industry and home gardeners have both found niche markets for certain crops when producers have focused on their healthy compounds and properties.

Wheatgrass is one such example - it has been grown for many years as a health supplement, and is now also being grown and sold as a microgreen. Other plants such as flax, chia, broccoli, radish and red brassica are also very healthy and can also be cultivated as microgreens.

For the indoor gardener or container farmer, microgreens are an ideal crop. They grow fast and don't take up a lot of space. They are planted in high density, meaning it is quite easy to get a high yield from them. Additionally, microgreens are able to sell at a premium, making the profit margins more comfortable than for their standard horticultural varieties.

Microgreens can be easily grown on a warm, sunny windowsill, or incorporated into a high-tech hydroponic vertical farm system, depending on the scale and goals of your operation. While there is some skill needed to successfully grow microgreens optimally at high densities while maintaining quality, the wide range of species and their popularity among consumers makes them a fantastic commercial proposition for growers looking to expand their hydroponic repertoires.

What Types of Microgreens Can You Grow?

There are four main types of microgreens, all of which can grow nicely and easily in a hydroponic system. They thrive equally well in outdoor and indoor conditions, so are good candidates for a shipping container farm.

In this category, you will find pea shoots, sunflower and corn shoots. These types of microgreens are often used as garnishes, but their flavor is mild enough not to overpower any dish, rather, to complement it.

The secondary type of microgreen encapsulates the plants that pack a punch in their flavor. These microgreens have a sharp, crisp, "peppery" flavor, which most people either love or hate. Microgreens in this category include cress, arugula, radish and mustards.

Typically, these microgreens can be used as garnishes or decorative finishes to your plate, but are also known for their characteristic flavors which can be used to add dimension to several dishes and cuisines. This category includes parsley, fennel, edible chrysanthemums, cilantro, basil, French sorrel, mint, dill, chives, onion and shisho (perilla).

Probably the most diverse of the four categories, these microgreens boast a wide range of flavors. Red cabbage, broccoli, spinach, corn salad, endive, chicory, celery, carrot and lettuce are all part of the tender greens category, along with tatsoi, mizuna, amaranth, chard and kale.

If you are new to growing microgreens hydroponically, you might want to start with one or a few of these beginner-friendly microgreens. They all produce dense, uniform stands that are equally easy to harvest. Growing them in this combination specifically, you will end up with an aesthetically pleasing garden full of different colours and shapes, as well as a gastronomically pleasing plate, with a nice range of flavors and textures.

Why Choose Hydroponic Systems for Microgreens?

Many of the benefits of growing microgreens hydroponically are the same as for any other plants. However, there are some specific to microgreens, too.

In hydroponic systems, water is reused. This means you can expect using up to 20-times less water than in traditional soil-based systems.

They can grow anywhere

Unlike a soil-based farm, which is best managed outdoors in a field, a hydroponic setup can thrive in a range of environments - your basement, your garage, your rooftop, or even inside a shipping container. Not only does this give you more flexibility, it also allows you to grow your microgreens all year round instead of just in a single season.

Growing hydroponically gives you precise control over not only how much of each kind of nutrient your microgreens are getting, but if grown indoors, also gives full control of environmental factors like temperature, water pH, and more. With this precision, hydroponics can be calibrated to offer the optimal fertilizer, pH, and temperature balances for each microgreen to thrive.

Composting is the best thing you can do for the health and fertility of your soil if you are growing crops in a traditional way. However, composting takes up space, and takes time to create. It can also lead to inconvenient messes if spilled. Hydroponic systems do not require any compost, so this issue is effortlessly averted.

Hydroponic plants can grow year round, they can be stacked vertically to maximize square footage upwards, and can be planted closer together than soil-based alternatives because their roots don't spread out as much in search of nutrients. These three factors together mean that the average annual yield per hectare of a hydroponic farm can be several times higher than the yield of a traditional soil field. Additionally, some microgreens like wheatgrass, kale, and kohlrabi actually do better in hydroponic systems anyway.

Avoid getting soil in the food

Growing microgreens requires a high sowing rate and plant density. When growing in soil, this can lead to small particles of substrate remaining in the plant. Microgreens are usually not washed after harvest, and therefore it is possible for soil granules to remain in the food, posing the risk of leaving crunchy grit behind for the eater. Growing microgreens hydroponically effectively side-steps this problem.

Setting up a hydroponic microgreens system

These microgreens can be grown in systems of ranging complexity, depending on your abilities and goals. Anything from an ordinary flat, hand-watered kitchen tray, to an intricate aeroponic or nutrient film system with carefully controlled environments vertically arranged in shipping containers managed with state of the art technology.

Always start with seeds that are specifically bred for microgreen growing. These seeds have a low percentage of non-plant matter, and will not have been treated with fungicides or other chemicals. This is especially critical if you're planning on growing corn, pea, or spinach microgreens - crops whose seeds are typically sprayed with fungicide.

Hydroponic microgreens are best produced on a thin mat or capillary pad that holds the seed in place and retains some moisture for germination. You can even use Paper towel, sheet of rockwool or burlap, or even thin kitchen cloth. These can all be used to cheaply grow a clean, high-quality crop.

Some microgreen varieties have seeds that are mucilaginous, meaning that once wetted, the seed forms a thick, gelatine-like layer that holds moisture. Cress and basil are examples of mucilaginous seeds. They do not need to be pre-soaked before sowing.

As soon as the microgreen seeds germinate, they require light and nutrients to produce the highest quality product. Propagation lamps are great at this stage, so long as they don't release too much heat, as this can harm the tender foliage (read also: Hydroponic Seed Germination).

Once the seedling leaves (cotyledons) are visible,, the young plant is starting to photosynthesize and nutrients will be absorbed by the root system.

Usually, a general purpose seedling nutrient formula is enough for microgreen production. Application of the nutrient solution is followed by a period of drainage with the growing surface holding sufficient moisture around the roots between watering.

Common Microgreen Problems and How to Solve Them

While hydroponic systems manage to mitigate several of the traditional ailments that soil-based crops face, they suffer from their own set-backs. One of the main issues microgreens face are rot and disease related to over watering or high humidity.

An environment in which there is too much water or humidity encourages bacterial and fungal growth on and around the plants. The solution for this is simple - simply creating some light air movement with the use of portable fans for example, can go a long way to dispelling stagnant moisture in the air.

Another problem microgreens face often is that they might grow too tall and bend downwards. This is an issue because it makes harvesting difficult. The simplest solution here is timing, and keeping an eye on the crops as they approach ideal harvesting height. Alternatively, look for seeds that are bred to remain on the shorter side.

In conclusion, growing microgreens hydroponically is a sensible, sustainable, and potentially profitable way to cultivate these plants. Hydroponics offer a host of benefits that traditional soil-based practices cannot come close to. They are also versatile enough to thrive equally well in both low-cost, low-input systems like a tank on the kitchen windowsill, and in high-tech, fully commercial urban hydroponic farm settings.

Cultivating microgreens in an indoor, vertical farm for example in a shipping container, can unlock a host of benefits for local communities, both in terms of food security, and accessibility to high quality, high nutrient density foods. If we are to meet the growing caloric demands of the growing global population by 2050, indoor hydroponic farming of microgreens - along with other plants - should be a serious consideration, especially in inner cities where food deserts are rampant, and healthy food is sold at a premium out of reach for many local inhabitants.