Drip Irrigation Systems: How It Works and Its Benefits

Drip Irrigation Systems: How It Works and Its Benefits 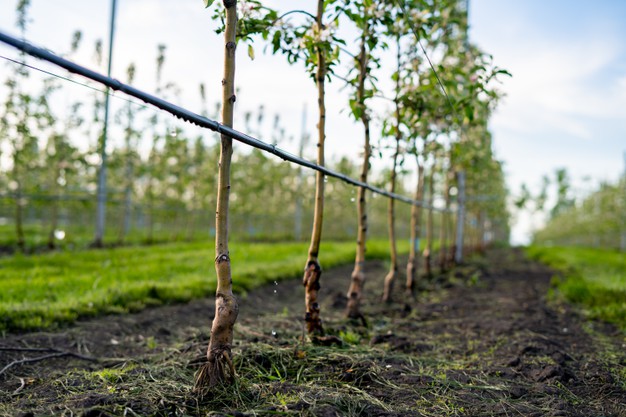 ‍Despite 12% of our global land area being dedicated to the practice of agriculture, it is shocking that we are still experiencing a global food shortage. This highlights the inefficiency in the current methodologies being employed to conduct agriculture around the planet.

In order to optimize this crucial industry, technology is being utilized to improve the various elements of agriculture. Drip irrigation systems is a classic example of a new method of offering irrigation in order to maximize the efficiency of the process.

In the following article, we discuss the specifics of drip irrigation, highlight its importance, and discuss the many benefits associated with this practice.

What is Drip Irrigation?

Drip irrigation is a method of nourishment to crops that involves controlling the amount of water and fertilizer applied across a specific space. In order to improve the efficiency of the irrigation system, water and fertilizers are supplied directly to the crop root zone. This helps to reduce the loss of resources through evaporation, drift, and runoff.

When a drip irrigation system is applied correctly, it helps farmers achieve immense uniformity and efficiency from the harvest.

A surface drip irrigation system is one that utilizes a thin wall ranging between 8 and 10 millimeters along with close emitter spacing ranging from 12 to 18 inches. The dripline in this method is injected 1 to 6 inches below the surface only.

This type of irrigation system is best applied on high value crops as the process of installing a new dripline can be expensive. The labor costs associated with this task further increase the expenditure faced by the farmer. Only high value crops will be able to help the farmers make a profit while using this system.

Sub-surface drip irrigation systems tend to utilize a slightly thicker wall ranging between 13 to 15 millimeters along with an emitter spacing ranging between 20 to 27 inches. The dripline of this system is usually installed 8 to 14 inches below the surface.

Sub-surface drip irrigation is a more permanent method of applying irrigation across farmlands. As this is a permanent system, it also becomes doubly crucial to ensure that the design and installation of this method is done flawlessly.

Row crops are often supplied with sub-surface drip irrigation systems, but this practice is slowly being applied in the growth of high value crops as well.

Irrigation is one of the first innovations to be utilized to upgrade the process of farming. It has been utilized immensely across the planet and it has been seen that some of the largest populations in the world such as China, India, and the U.S have over 100,000 square kilometers of irrigated land already.

This is not necessarily a positive fact as traditional irrigation systems have been known to be extremely wasteful in their utilization of water. These systems also lead to the build up of salts on the soil and the water logging of various crops.

The problem of salinization, in particular, has become a big problem in many regions around the world. Egypt, for example, has been utilizing the riverbed of the Nile to irrigate crops for over 5,000 years at this point.

As the process of irrigation draws salt from the lower sections of salt and brings it to the higher levels, it can lead to infertility in the region. In some regions, this process has gotten so bad that the soil has actually started to turn whitish in color. This issue can be commonly observed in regions of the world where irrigation has been practiced for a long period of time.

In order to counter this issue, drip irrigation can be utilized to replace traditional irrigation systems. Centre-pivot irrigation can be effective too but it is not a sustainable solution in the long run as it consumes large volumes of water and can be dangerous to the health of the soil

In comparison, drip irrigation allows farmers to have greater control on the volume of water being utilized on their lands. Instead of blanket watering the land, it is now possible to irrigate crops with immense precision. The process of eutrophication is also immensely reduced with drip irrigation as the fertilizers applied to the crops aren’t washed away into water outlets.

We can already see the benefits of drip irrigation systems when applied on a large scale. Italy, for example, is one of the largest agrarian economies in the world, and they have begun implementing drip irrigation across their farmlands in 2011. It is estimated that the switch to drip irrigation will help Italy save over 4.3 billion Euros over the next three decades. All of these savings also trickle down to various benefits to the farming community as well.

The Benefits of Drip Irrigation Systems

There are many positive benefits of applying drip irrigation systems on farmlands:

As the water supplied from a drip irrigation system penetrates slowly and deeply through the layers of the soil, it allows moisture to access the parts of the plants that require it the most. This allows plants to grow quickly and greatly improves their overall health.

One of the primary benefits of using a drip irrigation system is to reduce the wastage of water and fertilizers supplied to the crops. A quality drip irrigation system is known to utilize only a quarter of the water required by traditional overhead sprinklers. According to a recent study, using sprinklers is known to be highly ineffective as less than 70% of the water from this method reaches the soil. The remainder is lost to wind and evaporation.

When a reliable drip irrigation system is in place, it ensures that at least 90% of the water reaches the parts crucial root structure of the plants.

As drip irrigation systems are known to be so effective in their ability to supply water to plants, it helps to dramatically decrease the chances of erosion in a region. This helps to preserve the nutrition, fertility, and integrity of the soil in a field and also has a positive effect on the environment of a region.

Thanks to drip irrigation practices, it is possible to keep the foliage dry that would have otherwise gained a lot of moisture because of sprinklers. This helps to reduce the growth of powdery mildew in the foliage and prevents the formation of diseases that thrive in damp conditions.

Not only does the drip irrigation system help to lower the expenditure incurred by farmers by reducing the dependency on resources, but it also helps to boost their income by improving the yield and efficiency of the farms. This ends up having a positive impact on the overall financial condition of the farmers.

Traditional irrigation systems required a tremendous amount of time and effort from the side of the farmers to maintain the crops. This involved dragging sprinklers and horses from one section of the farm to another. Modern drip irrigation systems can drastically reduce the time and effort needed to maintain the nutritional levels of the crops. The use of timer and other automation tools simplifies matters even further.

As the drip irrigation system is often used to place water on the areas directly around the crops, it leads to the starvation of weed seeds. Thus the number of weed plants that germinate in a region also reduce substantially.

A drip irrigation system is highly versatile and can be virtually applied on any type of soil. It can even be used on unleveled landscapes, and this boosts the utility and adaptability of this system.

If a farmer is concerned by the physical appearance of their land and does not want the irrigation system to stand out, they have the option of hiding the irrigation tubes under a layer of organic mulch.

Minimizing Losses to a Drip

The process of watering plants in agriculture has traditionally been a taxing activity. Farmers from previous generations used to largely rely on rainfall and other natural sources, but irrigation systems have slowly reduced the uncertainties associated with this activity.