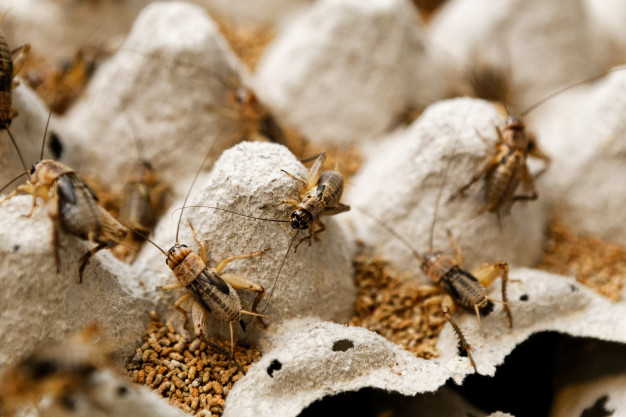 The global demand for high quality protein is rising exponentially. The world population is expected to balloon to 9 billion by 2050, the average diet in the developing world is shifting to be more meat-based rather than plant and grain based, and mass production of conventionally raised livestock has never been more affordable.

Meeting this surging global demand for high quality protein is an economic and environmental challenge. Animal agriculture is accountable for an estimated 14% of global carbon emissions - more than all methods of global transport combined. One possible solution to the protein conundrum? Cricket farming.

What Is Cricket Farming?

The United Nations Food and Agriculture Organisation (UNFAO) has predicted that approximately 1,900 species of insects are consumed worldwide, with 20% of the world's population consuming some form of edible insect; the vast majority being in the developing world.

Crickets are one of the most popular items on the edible insect menu for human consumption, just behind caterpillars and locusts, and have found some semblance of acceptance in the West as a legitimate alternative food source. The opening of cricket food companies like New York-based Exo, cricket-farming, though currently still deemed rather niche, indicate the possible early days of an emerging market. Indeed, it is predicted the global edible insect market is expected to rise 23.8% annually.

Cricket farming involves raising a variety of species of cricket in a controlled environment, usually either for personal consumption or for profit. It is a very popular practice in parts of the developing world, such as Kenya and Thailand.

For the keen cricket farmer, the activity can be an inexpensive and rewarding pastime that can feed pets, provide fishing bait, or even become a fully functional business without ever selling to human consumers.

How Does Cricket Farming Work?

Cricket farms are relatively low input and low maintenance food production system. Once the temperature and humidity levels have been optimised, the operation almost runs itself.

Usually crickets are raised in boxes which can be stacked on top of one another, much like an apiary. This makes cricket farms one of the most space-efficient farming operations. Farming crickets uses 95% less water than traditional animal agriculture, and crickets are 65% protein by weight, which arguably makes them the most efficient protein source in production. In fact, according to the UN, crickets are over 20-times more resource efficient than cows.

Crickets are harvested once they reach maturity and can be frozen and stored, or ground into a flour to be used as a high-protein and nutrient-rich alternative to regular wheat flour.

Raising crickets is a common practice in many areas of the world, and crickets can take on several useful functions.

By comparison, various cuts of beef come in at about 20g of protein per 100 grams, though with significantly more fat, calories, and negative effects on cardiovascular health, not to mention the added environmental impact of animal agriculture mentioned earlier.

Crickets are also high in omega-3 fatty acids, which are vital for optimal brain and heart health, and certain studies have determined crickets and other edible insects to be suitable sources of key minerals zinc and iron.

For the health and environmentally conscious, crickets are an excellent alternative to animal proteins and highly processed protein powders.

For your reptilian pets

Crickets are available for purchase at most pet stores specifically as food for reptiles, however farming crickets could be an enjoyable project or past time to show those reptilian pets some extra love. Plus, farming crickets on the whole is much less expensive than purchasing the ready-made feed bags.

For the seasoned fisherman, raising crickets as bait could be a great money-saving tactic. It is much cheaper than buying ready-made bait in the long run. It is arguably more convenient as well, as stopping for bait on the way to the lake will be a thing of the past. Simply remember to grab your crickets on the way out, with your other fishing equipment.

Like any entrepreneurial venture, the idea of selling crickets might take some time to capture the hearts and minds of the masses, but there are certain niches that would gladly purchase your crickets from you.

The financial barriers to entry are extremely low as far as business startup costs go; an entire cricket farm can be set up for about $200. Additionally and optimistically, there is lots of potential to turn a profit from a cricket farm venture. Pet stores, farmers, and avant-garde bakeries are prime buyers for a commercial cricket farmer.

How to Start a Cricket Farm: a Step-by-Step Procedure

Setting up a cricket farm does not take a lot of time, energy, or capital, and is easy to operate out of a small room or closet.

Get together your crickets and materials

Getting some crickets shouldn't be too challenging. Plenty of pet stores sell them as food for reptiles and amphibians. For first time cricket farmers or those who are simply experimenting, rather than planning to start a full-scale commercial operation, 50 crickets should be enough. It is recommended to go for Gryllodes sigillatus or Acheta domesticus for their edible qualities.

In addition to the crickets themselves, procure at least two 20-gallon plastic totes. One will serve as adult housing, the other for babies. Other materials to acquire include a selection of plastic containers, a bag of perlite, some potting soil, sponges, a misting bottle, heat lamp, and some empty egg cartons.

Set up the housing

Housing should be set up to accommodate a crickets' preferred environment - warm, moist, and shaded. Setting up in a shed or barn is ideal, though closets work equally well if raising crickets in a more urban setting. Maintaining temperatures between 15 to 30oC is key, though note that warmer temperatures will lead to faster breeding!

Cut two holes in the lids of each plastic tote - approximately 6 inches in diameter - and spread a thin layer of perlite on the bottom of each to sanitise it. Take 4 of the small plastic containers - fill one with potting soil - for the female crickets to lay eggs - and place saturated sponges in another two containers, to keep the environment humid. The fourth container will be for food.

Make sure to fill the remaining space in the totes with egg cartons. This creates a vertical habitat for crickets to occupy. It is recommended to hang a heat lamp over each of the holes in the plastic tote lids to boost temperature. Careful not to let it get too hot.

Note that the high levels of humidity can lead to fungus and rotting, which can kill the entire cricket colony. To avoid this, be sure to use dry feed and veggies with low water activity like carrots, beets, and zucchini. Additionally, be sure to do a weekly clean of the entire set-up, and avoid spraying water outside the breeding container.

Cricket food is available for purchase, although it is equally acceptable to simply discard food scraps into the cricket hatch. Nuts, seeds, fruit, and anything that would otherwise head for the compost bin is permissible.

Interestingly, studies have shown that crickets thrive best on the human refuse diet, which consists of leftover fruit and veggies, rice, pasta, bread, cheese skins, pork and beef, and egg yolks. Other ingredients crickets can be raised on include various flours, sugar beet, silo, yeast, and corn.

The taste of crickets will vary significantly depending on how they are fed. In fact, crickets raised on a diet of wine and wheat flour were considered a delicacy by the Ancient Roman aristocracy.

Make sure to check the food and water once a day at a minimum. Do not overfill the water container - just ¼ of an inch should do. This allows crickets to drink while preventing them from drowning.

Once optimal conditions of temperature and humidity have been established, male crickets will begin chirping - signalling the commencement of the first mating season. From then, it takes about 7 - 10 days for the first eggs to appear in the potting soil. Make sure there is a mesh covering on the potted soil container, as crickets are cannibals and will eat the eggs before they hatch if they are left unprotected.

Once they appear, remove the container with the potting soil from the main plastic tote and place it in the second tote, designated for baby crickets. Within a week, the nymphs (baby crickets) will begin hatching. They will require the same kind and frequency of care as adult crickets.

After roughly two months, the crickets will have reached full maturity. To harvest them, simply place them directly into a freezer, where they will quickly and painlessly freeze. Placing the entire tote in the freezer is preferable if possible, however for smaller freezers, simply stuff the cricket-covered egg cartons into plastic bags and place them in the freezer.

Frozen crickets may be roasted, seasoned, and eaten whole, or dehydrated and ground to a flour for making a range of baked goods.

After beach harvest, the potting soil and the perlite will need to be discarded and replaced. O
Once the baby crickets reach mate and lay eggs, transfer them into the reset plastic tote. In this way, the plastic totes are always alternating between hosting adult and baby crickets, and the farming operation can continue uninterrupted.

The Future of Cricket Farming

Crickets are a much healthier and environmentally friendlier way of getting protein into our diets. However, public opinion in the West remains skeptical if not slightly disgusted at adding a sprinkling of cricket to salads or in smoothies. However, cricket farming has taken off in parts of the developing world as a method of adding a stable income to a rural household.

Cricket farming is an inexpensive, simple activity that doesn't take much effort. If eating the crickets seems unappealing, they can be used as bait or as feed to be sold to owners of reptilian pets, while adding some extra  income to the farmers' pockets without taking up too much space or being resource-intensive like most farming operations.