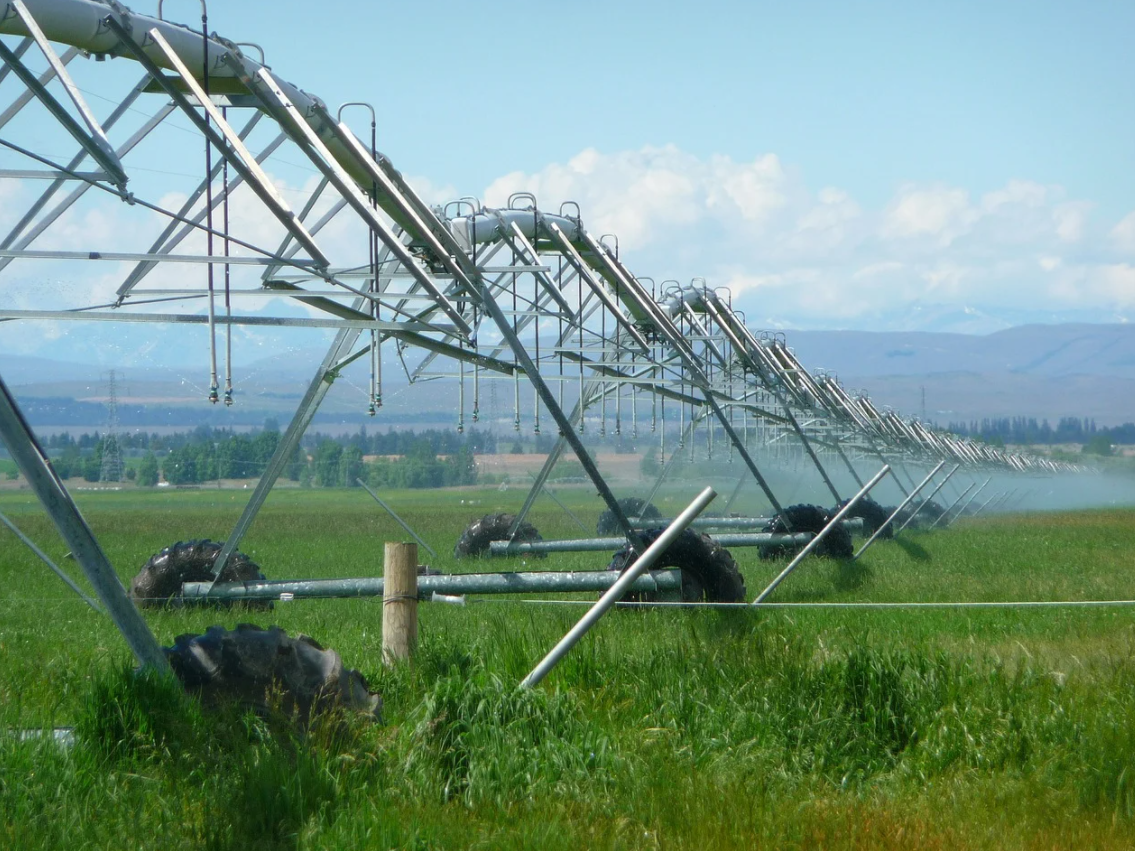 The agriculture industry is one of the largest consumers of water on the planet currently. It is estimated that nearly 70% of all freshwater withdrawals are being utilized for the purpose of agriculture.

This is an enormous volume and it boils down to the fact that traditional methods of irrigation are unable to make the best use of this vital resource. In order to improve the utilization of water in irrigation systems, improved models are being sought within the industry. One such alternative to emerge in recent times is center pivot irrigation.

We discuss the specifics of center pivot irrigation in the following article, along with discussing the utility, advantages, and disadvantages of this system.

What is Center Pivot Irrigation?

Center pivot irrigation refers to the use of a mechanised irrigation system that can help to irrigate crops by maintaining a circular pattern around a central pivot. It largely consists of a lengthy radial pipe that is supported by sprinkling towers. These towers pivot around a center point of the whole mechanism.

By using the radial pipe system of center pivot irrigation, water is made to travel along a straight line down the field. All the nozzles of the pipe have the same flow rate and are made to cover the same area as well. This helps to greatly boost the uniformity of the water being applied to the crops.

The design of this system is such that the sprinklers located near the pivot tend to cover a smaller area in comparison to the nozzles located at the end of the pivot.

Based on the length of the radial pipe utilized in this system, it can be used to cover as much as 130 acres in a straight system and nearly 155 acres in a swing-arm system. Based on this information, center pivots systems are mostly used to irrigate larger farms in a region.

This modern method of irrigation utilizes the following components in order to effectively water the fields:

The pivot system of this mechanism revolves around a central pivot point. This is the area where the water first enters the pivot pipes. It is also the location of the control panel.

The control panel houses the hardware that’s attached to the central pivot point and it enables the farmers to operate the machinery. This is considered the brains of this mechanism, and it can be used to start and stop the machine, as well change direction, and change modes of operation including running dry and running wet.

There are numerous types of control panels available for center pivot irrigation currently. Farmers can pick up basic or advanced digital panels based on the budget and requirement.

This is the part of the machinery that touches the ground and it contains the accompanying hardware that allows for the movement of the system. It usually consists of wheels, a base beam, a drive train, and other important structural supports.

There is a tower box located within each drive unit of a center pivot irrigation system. This is the compartment responsible for controlling the various components of the drive unit. It allows the overall machinery to move in the right direction and for specified periods of time.

These are the long pipes used to connect various drive units. Each span consists of many crucial components such as the water main line, sprinklers, and set of supporting trusses in order to manage the weight between the two towers.

The Last regular drive unit, or as it's commonly called LRDU, is the final tower located at the end of the regular pivot. It can also be the last tower located before a pivot or corner arm as these are used to extend the irrigation facilities across farms.

Why Use a Center Pivot Irrigation System?

Research has revealed that a pivot system is one of the most efficient methods of irrigating farmlands. It allows farmers to cover numerous acres of land in a relatively small span of time, and it can also be used to apply pesticides and fertilizers to the crops with equal efficiency.

Additionally, this system only relies on a single piece of machinery to be able to execute on numerous important elements of farming.

The Advantages of a Center Pivot Irrigation System

The following are some of the major advantages of a center pivot irrigation system:

The manner in which a center pivot system is designed helps in the uniform application of water across large sections of farmlands.

As the center pivot system allows farmers to execute on various farming practices with a single machine, it greatly reduces the dependency on labor across the harvest season. Farming is seen as an unreliable sector and maintaining labor forces in this industry can be challenging to many farmers. The use of technology such as center pivot irrigation systems help to reduce the stress on farmers caused by the inconsistency in the availability of labor.

It is possible to operate the mechanism of center pivot irrigation at lower pressures as per the requirement of the farmers. This helps to conserve enormous amounts of energy in the long run. Additionally, this method of irrigation is also known to be far more efficient when it comes to the utilization of water. It helps to prevent water runoff and ensures that the water bills incurred by farmers is greatly reduced.

Additionally, using this system also makes it easier for farmers to manage the water levels in their soil. The semi-automatic nature of this mechanism, coupled with the lateral movement of the sprinklers makes managing water levels easier for farmers. It is seen that the efficiency of water application in center pivot irrigation is nearly 80%, and this is far higher than traditional methods.

Modern center pivot irrigation systems also come with a timer feature that allows farmers to apply water in their farms at any time of the day or night. This can be executed without the farmers even leaving their homes. The advantage of automating this element of farming is enormous and it helps save farmers a lot of time and effort.

It is possible to utilize the center pivot system to nourish nearly all types of crops. This includes fruit trees, vegetables, and arable crops. Thus it makes sense for farmers growing multiple types of crops across the year to rely on this system of irrigation.

Most of the modern center pivot machines have an expected life span of at least 20 years as well, which means the farmers will have to invest in the large scale machinery only once every couple of decades.

The Disadvantages of a Center Pivot Irrigation System

In this section, we look at some of the most common drawbacks associated with the use of the center pivot irrigation system:

Setting Up is Expensive

As we have previously discussed, a center pivot system is reliant on extremely lengthy radial pipes and accompanying sprinklers to cover large sections of farmlands. This makes setting up a center pivot system a relatively expensive process. The cost of the machinery needed to execute this process is on the higher end of the spectrum, and it can currently only be afforded by farmers with extremely large plots of land.

Maintaining this system does not come cheap either, and it will require timely inspections by professionals to ensure that the uniformity of the process is maintained.

As the name suggests, the irrigation in this method occurs in a circular fashion due to the use of a pivot in the sprinkler system. This means that it is difficult to maintain uniformity of irrigation on farms that are either square or circular in shape.

Additionally, if farmers have to create circular fields in order to make full use of the center pivot system, it leads to wastage in the farmland as there will be a lot of unused space around the circular plot.

The freshwater resources across our planet are waning quickly, and this comes down to the excessive use of this resource by the agricultural sector. Although this industry is responsible for feeding our population, it is inadvertently starving our planet. The best way to counter this issue is to apply modern methods of irrigation such as center pivot irrigation across all farmlands on the planet.