Agricultural Biotechnology: Driving the Next Frontier in Farming

Agricultural Biotechnology: Driving the Next Frontier in Farming 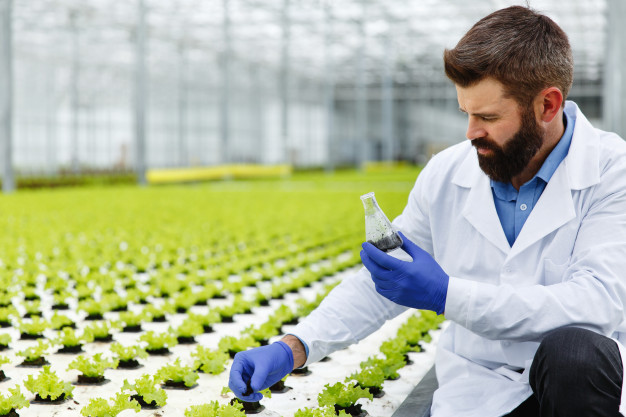 With populations expected to rise to 9 billion by 2050, farmers and agricultural scientists are always looking for the best ways to boost yields with minimal impact on the environment. Agricultural biotechnology has already proved very successful across a range of initiatives in the last 50 years, from boosting yields and making crops more resilient, to reducing blindness and informing how food-borne infections are treated.

Biotechnology plantings are estimated to be at 88% for corn, 93% for soybeans, and 94% for cotton in the United States, according to the USDA's National Agricultural Statistics Service (NASS) - and it seems they are here to stay.

What is Agricultural Biotechnology?

Agricultural biotechnology is an area of agricultural science that uses various techniques such as genetic engineering, breeding techniques, vaccines, molecular markers and diagnostics, and tissue culture, to modify living organisms in some way.

Typically, these modifications serve to improve plants' or animals' resilience to a range of factors such as climate or disease. Alternatively, agri biotechnology can act as a tool for developing microorganisms for specific agricultural uses in industry.

Applications of agri biotechnology are far-reaching, and arguably only constrained by imagination and access to the necessary scientific resources. Of course, these techniques and applications do not come without their own ethical questions - the public discussion around genetically modified organisms (GMOs) for example, tend to elicit polarising reactions.

GMOs are being engineered for several purposes. For example, scientists are now developing genetically engineered crops for phytoremediation - the process of the plant detoxifying the soil or absorbing toxic substances like heavy metals before being harvested and disposed of, leaving a clean soil behind for the commercial crops to grow in.

Genetic engineering is not limited to crops. Altering microorganisms also leads to breakthroughs in vaccination for livestock, or making antibiotic production more efficient through microbial fermentation.

Other applications of agri biotechnology include creating crops that are nutritionally-enhanced to provide specific nutrients that are deficient in a certain population. Arguably, the crowning achievement of agricultural genetic engineering was Golden Rice.

Golden Rice is a genetically modified white rice that contains higher-than-normal levels of vitamin A. It was developed over 20 years ago to help combat blindness and high levels of HIV, malaria, and tuberculosis in the developing world - conditions to which susceptibility is known to increase in vitamin A-deficient people.

Crops have also been modified to be more resilient to climate and weather conditions. For instance, semi-dwarf wheat was developed as an alternative to traditional wheat, with shorter stalks. This feature conferred an advantage to semi-dwarf wheat; it didn't fall over when yields of grain got too high and so too heavy, nor when strong winds blew through.

Indeed, semi-dwarf wheat has been the dominant variety of commercially-grown wheat in use for decades, and has been credited with kick-starting the Green Revolution of the 1960s, and saving over a billion people from starvation.

What Are the Benefits of Agricultural Biotechnology?

It has made weed and pest management much easier and safer, with the advent of crops and animals engineered to be resistant to common effects of pests and weeds. Examples include herbicide-tolerant soybean plants or insect-resistance cotton crops.

Similarly, agri biotechnology has been used to protect crops from disease. For example, the US papaya industry was practically saved from collapse when papayas resistant to the papaya ringspot virus were developed.

Crops are being developed with the ability to grow in salty soils, or to better withstand drought The first of their kind are just entering the marketplace. Such innovations may be increasingly important in adapting to or in some cases helping to mitigate the effects of climate change.

Additionally, biotechnology in agriculture can be used to boost yields and quality of yields, as explored with the semi-dwarf wheat example earlier. Yields in India and Pakistan doubled very shortly following its introduction on the Asian Sub-Continent.

Benefits extend beyond the direct interference in agricultural processes. Agri biotechnology has also facilitated increased understanding of key pathogens responsible for food-borne diseases such as Listeria and Campylobacter. These breakthroughs make our food supply and storage much safer, and can help us identify novel treatments for such outbreaks.

The Future of Agricultural Biotechnology and Farming

Applications such as reducing allergens in foods and creating the tools to better evaluate GMOs and their potential environmental problems, such as induced resistance in pests or disease pathogens. For example, researchers are monitoring the insect pests of certain crops such as corn and cotton for emergence of a Bt resistance - the compound produced by these crops as a biological insecticide.

Of course, this research is controversial for many, and has been undeniably politicised in recent years. The moral and ethical arguments that interfering in the natural order of things is akin to 'playing God' will always exist in certain circles, and lead to push back against agri biotechnology research.

Similarly, valid scientific objections exist, the most commonly cited one being that the long term effects of genetic engineering specifically are not well known or documented, and could lead to disastrous unforeseeable consequences for our ecosystems.

Agricultural biotechnology has the power to seriously transform our food system and pave the way to a food secure world, even in the face of rising populations. It has been at the core of several food and agriculture initiatives that have already proved successful over the last half-century, and could continue to provide valuable solutions should we let it.