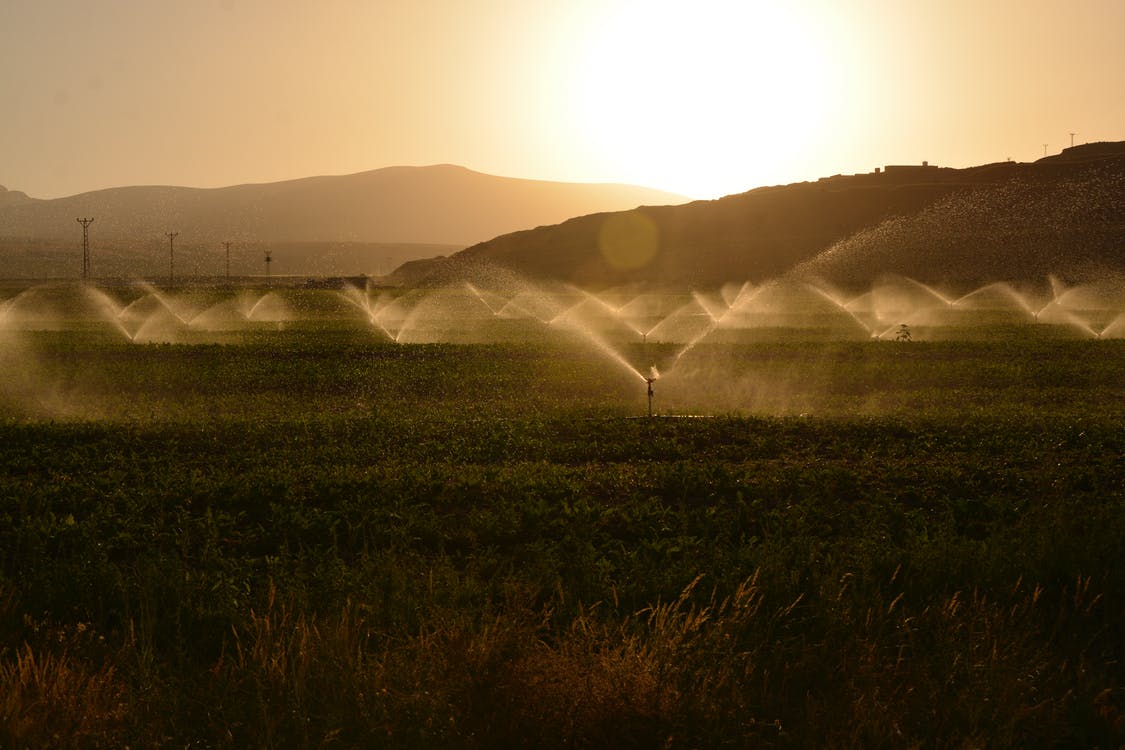 In areas where rainfall isn't regular or frequent enough, there is a need for agricultural technology innovations such as additional irrigation to keep crops happy and healthy. However, knowing what kind of irrigation system is best for your particular budget, soil type and crop is vital to a profitable and productive farm.

Aluminum pipes distribute water from the source to the field. Typically, one main line stretches across the field, which branches off into multiple lateral pipes that irrigate the field in sections, usually about 40 feet apart.

The main advantage of this system is that it is relatively cheap to set up.

The main drawback is that it is very labor-intensive to set up - as the name suggests - it requires someone to trawl over the whole field and lay all the pipe down.

Solid-set sprinklers are similar to hand-moved sprinklers. In this system, the entire field is covered with laterals, and these laterals remain in place for the entire growing season.

The main advantages of this system are its great suitability for protecting against frost, its ease of operation, and relatively low labor requirements - especially compared with its hand-moved counterpart.

The main disadvantages are that it is a much more expensive system, and the permanence of the lateral pipes can get in the way of some field operations like spraying, cultivation and harvest.

The main advantage of this system is that it irrigates a lot of land very quickly.

The disadvantages include that it is still labor-intensive to set up, even though it is less labor-intensive than hand-moved sprinklers. Additionally, these sprinklers only produce large droplet sizes, which may injure more delicate crops. Finally, this system also causes adverse wind effects on water distribution patterns due to its high-intensity stream.

As the name implies, this irrigation system consists of a big gun sprinkler mounted on a wheeled cart. This cart is usually connected to a hard plastic hose on a mechanical reel, meaning it can be transported around the field if needed with relative ease. These systems are used by farmers to irrigate large areas of land with relatively little manpower.

The main advantages of this system include: less manual labor to set up and operate, improved water distribution, irrigates more land with less labor, it is adaptable to suit almost any shape, size and contour of field.

The main disadvantages of this system include a high capital and operating costs, its unsuitability for frost protection, it creates large droplets which can injure tender crops, and finally the adverse effect of wind on water distribution. It also poses a risk of  potential erosion and runoff, which depletes the topsoil and causes damage to nearby water ecosystems.

Center pivots are another example of a moving irrigation pipeline. Water is distributed along the length of the pipe, which pivots around a central, fixed water supply. These are best suited for fields with a single crop, and wouldn't do well in a mixed or intercropped farming system.

If you are a monocrop farmer, this irrigation system holds several advantages, including relatively low labor needs once it is set up, the fact that it operates at a medium pressure saves energy when compared with other higher-pressure irrigation system types, and it covers large areas of land with uniform water coverage.

The main disadvantage is that they are extremely expensive to set up and operate.

Trickle irrigation, also more commonly known as drip irrigation, applies water to only the soil. This type of irrigation is most often delivered via a tube that runs the length of the row of crops, and is one of the most efficient water delivery systems there are.

The main advantages include more efficient water usage, the ability of drip irrigation to be adapted for fertigation, reduced risk of problems surrounding disease as leaves and other plant parts remain dry, and finally low energy and labor requirements to set up and maintain.

The main disadvantages of drip irrigation include the risk of pipes freezing, which can cause blocked emitters as well as broken lines and connectors. Additionally, the system is not suited to frost protection.

Irrigation systems are more than just water delivery systems. More advanced systems can be integrated with fertilizers, which create a system known as fertigation. This system uses the irrigation infrastructure to apply nutrients to soils with little to no marginal human labor required.

Similarly, chemigation describes the injection of chemicals such as herbicides or pesticides to help manage these yield-affecting factors.

A drought that struck Illinois in 2012 highlighted the stark effect a very minute water shortage can have on farmland. One farmer reported a harvest of 50 bushels per acre, while another farmer 20 miles away harvested 190 bushels per acre, having received just 0.4 inches more rain.

This led to Illinois farmers investing in an app that helps with water reporting, and as of 2015, it is now required for farmers in Illinois to report water use on irrigated land, which helps make access to this vital resource more equitable and yields more evenly distributed across the state.

There are several different types of irrigation system to consider when setting up a farm. There is no one-size-fits-all solution as the best option for you will depend on the climate and precipitation conditions in your area, the type of crop you're growing, access to energy, and your budget.